New York - Dreaming of a short getaway? Look no further than Ouarzazate in the south of Marrakech. This magical destination promises to be the perfect getaway. 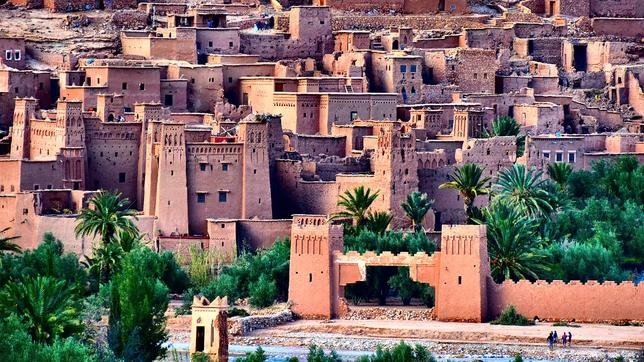 New York – Dreaming of a short getaway? Look no further than Ouarzazate in the south of Marrakech. This magical destination promises to be the perfect getaway.

ABC Spain shares the top 8 attractions in the area considered to be a “paradise in the desert”.

The Kasbahs are buildings made of mud and adobe topped by four defensive crenellated towers, one at each corner. Their beauty is intriguing, since from afar, these buildings resemble a medieval castle. Kasbahs date from the 19th century. They consist of a central patio and they are considered the most common construction in the area, historically used as residences of the aristocratic Berber families.

If journeying across 170 kilometers is your kind of fun, visit The Dades Valley known as the “Way of the thousand Kasbahs” which runs from Ouarzazate to Tineghir and you will see the various Kasbahs the Berbers built to ward off invaders.

Contrary to the Kasbahs which form a city, the Casares form a wall- fortified village that inhabited up to 3,000 people. To differentiate Kasbahs from Casares, ABC Spain explains a Kasbah as single one-level house, while a Casar is a town that can contain multiple Kasbahs, mosques, schools (madrasah), public baths (hammam) and markets (suk).

3. The Palm Grove at Skoura

An oasis in the arid desert, we find The Palm Grove at Skoura with beautiful greens in the lower Dades Valley. A landscape framed by the M’Goum of the High Atlas, with more than 70,000 date palm trees, olives, figs, almonds and pomegranates, you will feel you are in the middle of a dream. It is considered a huge oasis with miraculous streams of water rushing through the orchards in an intricate network of canals fed by rivers Hajaj and Madri, around impressive Kasbahs. If you want to enter “The Arabian Nights” fairytale, visit the Palm Grove at Skoura.

If history is your passion, visit Ait Ben Haddou dating back to the XVII century. An authentic medieval city across the Ounilla River. It is a set of Kasbahs located 30 kilometers on the way to Ouarzazate from Marrakech. Ait Ben Haddou has withstood devastating torrential downpours. ABC Spain calls it a ‘world of fable’ filled with Kasbahs of the wealthy, which nowadays house shops and taverns. It also includes a mosque, the tallest building in the area, and an inn for caravans.

With all this splendor, in 1987, UNESCO included Ait Ben Haddou in its list of World Heritage.

You might not know this city by name, but you are about to discover one of the most essential destinations inthe desert. Ouarzazate which means “City Without Noise” has a special charm. It is considered the “Gateway to the Desert” since all routes into the Sahara depart from here to places like Argelia and Timbuktu.

Oarzazate is also the capital city of the province. It has forever been the “crossroads” of those coming from the interior of Africa enroute to Marrakech or Fez. ABC Spain tells us that starting December 2014, Air Europa launched direct flights to the area from Madrid.

If you associate the term Amazigh to just ‘one’ group of people, keep on reading. Amazigh, known also as Berbers are more than an ethnic group, they are a set of natives from North Africa, encompassing the Atlantic to Egypt and the Mediterranean to the Sahel. Such name Berbers, was adopted when the Romans invaded their lands and called them “barbaroi” barbarians. Contrary to popular belief, Berbers are not Moors, Amazigh” meaning free men.

With a language that is written with the Tifinagh alphabet, they represent 40% of the Moroccan population.

A top attraction for foreigners are the various film studios found around Ouarzazate, named “Hollywood of Africa”. Through history, several acclaimed films have been shot in this area such as Lawrence of Arabia, Asterix, Cleopatra, Jewel of the Nile, The Mummy, Gladiator, Prince of Persia, etc. These film sets are open to the public while not in use, for a mere EUR 5 (50 dirhams) per visit. They are mostly located on the road between Oarzazate and Ait Ben Haddou.

If you love roses, want to impress that special someone, or maybe take some colorful photography in the middle of the desert, visit Valley of the Roses. Located 80 km from Ouarzazate next to Asif M’Goun River, this area is known for its production of roses. However, if you expect to find thousands of roses in one area, think twice. Interestingly, the roses are not spread in huge fields, but they are intricately planted to form fences separating the different orchards in a tapestry style.

More than just a beautiful vision, these roses served as fences to prevent animals from eating the vegetables in the orchards. ABC Spain reports that if all the rosebushes in the area were to form a single straight line, they would reach over 4,000 km in length. Very impressive!

Definitely, the Kingdom of Morocco is one of the most unique and extraordinary places on earth, perfect for a magical getaway to remember.