Rabat - In an unprecedented move, Moroccans have received recognition from Italy’s giants AS Roma as the team expressed its gratitude to its fans in Morocco for their love and support, on Sunday. 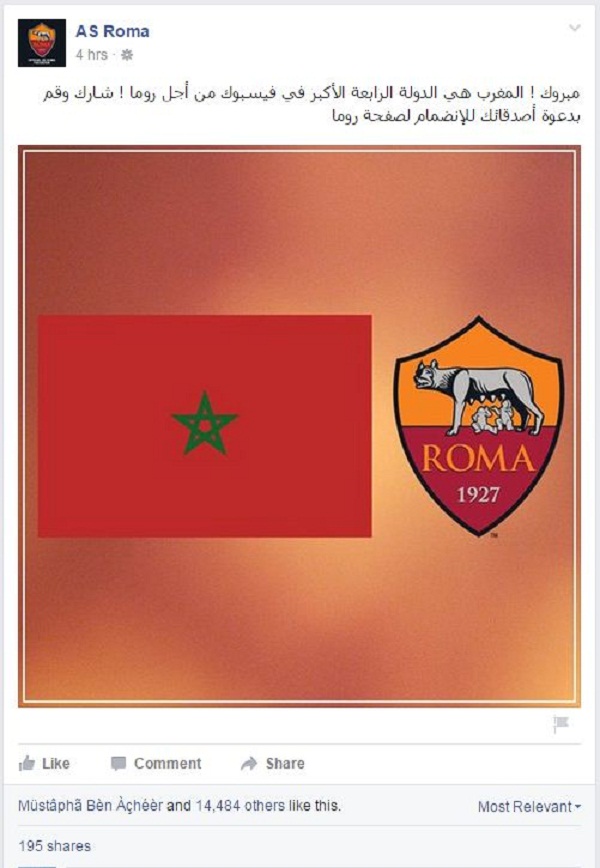 Rabat – In an unprecedented move, Moroccans have received recognition from Italy’s giants AS Roma as the team expressed its gratitude to its fans in Morocco for their love and support, on Sunday.

AS Roma’s official Facebook page posted on Sunday a picture of the Moroccan flag along with the team’s logo. In the caption, a message in Arabic read: “Congratulations! Morocco has the world’s fourth largest fans of AS Roma.”

AS Roma’s special post has been shared widely by Moroccan social media users, receiving a wave of appreciations.

While Spain’s two teams FC Barcelona and Real Madrid are the most popular among Moroccans, AS Roma gained huge popularity in Morocco by signing Morocco’s defender Mehdi Benatia in 2013.

Some Moroccan social media users replied to AS Roma’s post joking that “most Moroccans liked the Italian giants’ page after signing Benatia, and forgot to dislike it later when he left the team for Bayern Munich.”

In 2013 Mehdi Benatia joined AS Roma from Udinese for an estimated 13.5 million euros. Benatia spent with the Giallorossi a successful season, as he played 33 games and scored 5 times, becoming one of Serie A’s best defenders.  In 2014, he left AS Roma to join Bavarian giants Bayern Munich.

Benatia is the most influential sports figure in Morocco. Moroccans consider him their hero as he honored them worldwide. He won the hearts of Moroccans when he chose to play for Morocco over France.