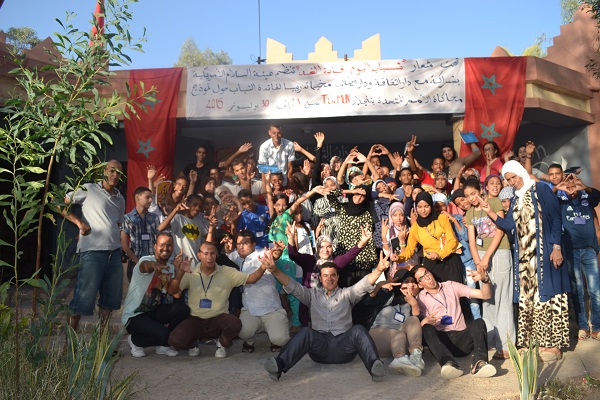 Rabat – Tinejdad, a small city in the province of Errachidia South East Morocco, hosted the first Model UN camp in the country from July 23rd to July 30th for 53 students from different villages in the region.

The camp, whose theme was “today’s youth, tomorrow’s leaders,” was organized by Andrea Filzen, an American Peace Corps volunteer, in collaboration with Larbi Arbaoui, Morocco World News assistant editor and correspondent, and in partnership with the House of Culture “Dar Takafa” in Tinejdad.

The TinMUN camp was fully funded by Peace Corps, and it took place at both the House of Students “Dar Talib” and the House of Culture “Dar Takafa”.

It aimed to motivate the region’s youth to get to know the functions of the United Nations, and to have an idea about the international system and international relations.

During the camp, students attended workshops and training sessions that developed their skills in public speaking, debating, research and writing skills and resolution papers.

The campers were able to experience the work that delegates do, debate and defend their countries’ positions at the Tinejdad MUN conference (TinMUN), whose topic was “Poverty and hunger in the world”

The workshops and training sessions were facilitated and animated by various expert volunteers who came from all over Morocco.

“The idea of organizing a Model United Nations conference in Tinejdad was challenging, and exciting at the same time,” Larbi Arbaoui said.

“After a long process of preparation and hard work, the TinMUN 2015 overnight camp which lasted one week was successful thanks to the primary support of the Peace Corps, the House of Culture, Dar Talib, the expertise of Moroccan trainers and the logistic help provided by the local authorities and the community,”  he added.

In parallel to the professional workshops that aimed to increase the participants’ interest in international issues and prepare them for the future MUN conferences, they enjoyed various activities such as games, competitions, and cultural evenings.

The participants also went on field trips to nearby villages and visited the fortresses in Tinejdad as a way of learning about the history of the region and its demographic, cultural, and architectural characteristics.

One of the most interesting activities that took place during TinMUN camp was the cultural evening where students were able to learn about foreign cultures from volunteers who represented the US, Mexico, Puerto Rico, and Japan.

Those volunteers presented their countries’ culture, cuisine, customs, and answered all the students’ questions. This was an opportunity for the campers to get to learn about those countries and to appreciate cultural diversity.

“From camp songs to couscous lunch, a lesson on public speaking to a panel on cultural diversity, picnic hike to Tinejdad’s first Model UN conference, and from belting out “This Land is Your Land” sung by the group of Imenza n Tilleli, to dancing to indigenous Moroccan music, Tinejdad’s Model UN camp (TinMUN) was a roaring success,” Andrea Filzen, a Peace Corps volunteer, told Morocco World News.

The two days preceding the MUN conference, both the campers and their trainers were working very hard to prepare their speeches, their arguments for the debate and to submit their position papers.

“I was enormously surprised about the cleverness and interest that the participants showed during the workshops through their active and fruitful discussions,”Ouiam Mellouk, a trainer in the MUN camp, said.

This allowed them to appreciate team work and interdependence, while fostering a healthy competition amongst the campers.

“TinMUN camp proved itself to be a success. It was not only an opportunity for entertainment but also a learning experience through a number of insightful and enlightening activities, workshops, and discussions/debates. It’s been rewarding seeing the campers develop that sense of autonomy, leadership, and willingness to try new things.” said Bouslam Abaid, one of the trainers.

July 29th was the big day of the MUN conference. The main hall at the Tienjdad’s Municipal held TinMUN’s General Assembly and was under the chairmanship of Larbi Arbaoui.

“Delegates did an excellent job in representing their countries, delivering their speeches and participating in the debate. The conference demonstrated their seriousness, hard work and commitment,” Aicha Bahou, director of the House of Culture, said.

“Taking part in organizing a Model United Nations (MUN) week-long training camp for the youth of the small, rural town Tinejdad was rewarding, challenging, and a novel experience for myself and for the entire town” said Andrea Filzen.

“This camp could not have been successful without the many hands and heads that brought their enthusiasm and passion for community service to the camp. I am extremely thankful for the support of the whole community of Tinejdad and the support of the camp’s team leaders,” she added.

The camp concluded with a social party entertained by the campers themselves; singing, acting, and dancing.

Certificates were given to all the participants, who experienced a range of mixed feelings; feelings of happiness for their outstanding accomplishments and feelings of sadness because the camp came to an end.

The campers were in tears while saying goodbye to their trainers, albeit hopeful to see such initiatives take place in the future.