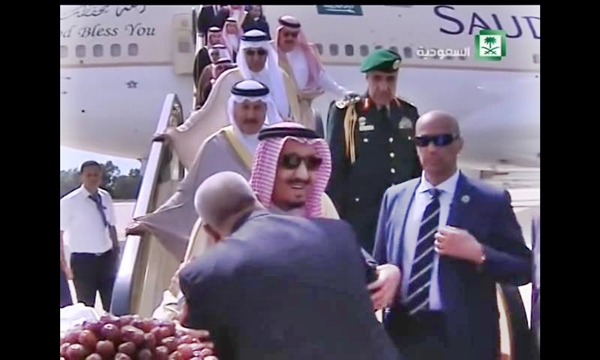 Social media users expressed their anger at the way the Head of Government bowed and kissed both shoulders of the Saudi Monarch.

Many Moroccans saw Benkirane’s bow and kisses as a “debased” act, belittling the Head of Government and disrespecting the Kingdom.

In this context, a Facebook user believes it was not necessary for Benkirane to kiss the shoulders of the Saudi king, simply because he was at that moment representing the King Mohammed VI.

Addressing the Head of the Government, the Facebook user wrote in Moroccan Arabic what can be translated into English as: “You are representing the king, and his Majesty never kisses anyone’s shoulder.”

Despite a wave of Facebook posts and comments decrying the “ashamed” way in which Benkirane received the Saudi monarch, some Moroccans see nothing wrong with the Head of Government’s reception protocol, claiming “kissing is part of the Moroccan culture to demonstrate hospitality.”

King Salman of Saudi Arabia arrived in Morocco on Sunday after his stay in France, which was expected to last for three weeks, was unexpectedly cut short. The king’s stay on the French Riviera was mired in controversy following his request to annex an entire public beach for private use.