Miami - Saudi Arabia’s King Salmane is once again the hot topic of the week. His vacation in Côte d’Azur, France had the locals and the authorities raging. The King and his entourage of 1,000 people cut their trip to the French Riviera short and decided to visit Morocco. 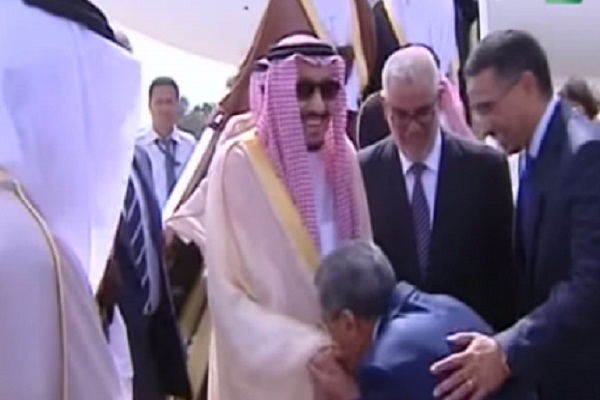 By
Karla Dieseldorff
-
Karla is an award-winning actress and producer.
Aug 4, 2015
Spread the love

Miami – Saudi Arabia’s King Salmane is once again the hot topic of the week. His vacation in Côte d’Azur, France had the locals and the authorities raging. The King and his entourage of 1,000 people cut their trip to the French Riviera short and decided to visit Morocco.

Upon his arrival in Tangier last Sunday, King Salmane was welcomed by a large number of Moroccan officials, Heads of State, Moroccan military, and other important locals.

The honorable greeting was televised on Saudi television and the images did not take long to create a stir with Saudis as well as Moroccans. The video shows King Salmane descending from his private aircraft followed by his entourage. At the bottom of the staircase he is then greeted by what seemed well over 20 high-ups who were lined up along a rolled-out carpet waiting their turn to salute the King.

Between the excitement and joy of such event, the King was hand-kissed and shoulder-kissed by many, including Head of Government Abdelilah Benkirane. But the greeting that sparked the most criticism was that of a man performing a series of hand kisses to the King.

The scene has been harshly commented as many people have reported on social media outlets that the late Saudi King Abdallah ben Abdelaziz Al Saoud had prohibited this kind of greeting demonstrations since 2013.

According to The HuffPost, the man who kissed the King’s hand with such intensity is just a man who runs a hotel in the area. Ironically, Benkirane who looked down on the man’s behavior, was himself also strongly criticized for kissing the King’s shoulder.

King Salmane is for sure giving the region lots to talk about.