Miami - A Turkish couple have won the hearts of 4,000 Syrian refugees by inviting them to their wedding celebration in the Turkish province of Kilis near the Syrian border. 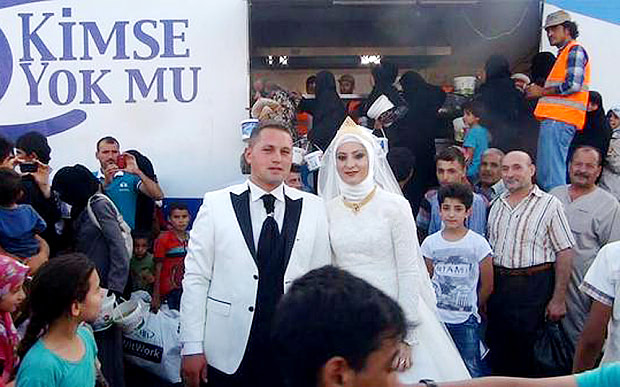 By
Karla Dieseldorff
-
Karla is an award-winning actress and producer.
Aug 5, 2015
Spread the love

Miami – A Turkish couple have won the hearts of 4,000 Syrian refugees by inviting them to their wedding celebration in the Turkish province of Kilis near the Syrian border.

The Turkish bride and groom spent their wedding day celebrating with the Syrian refugees and managed to feed all 4,000 guests. Fethullah Üzümcüo?lu and Esra Polat got married last week. These refugees fled Syria four years ago at the beginning of the civil war.

Kimse Yok Mu (Is Anybody There?) is a Turkish charity affiliated to the Gülen movement (Hizmet), inspired by the teachings of Fethullah Gülen, a Turkish Islamic preacher exiled in Pennsylvania. This charity helps millions of people in need, and also feeds these 4,000 refugees who live in Kilis. Turkey has received almost 2 million refugees to date.

The United Nations has reported that over 4 million Syrian refugees have fled their country and has described it “the worst crisis of its kind in a generation”.

According to Serhat Kilis newspaper, it was the groom’s father, Ali Üzümcüo?lu, who suggested the idea.

“We thought that on such a happy day, we would share the wedding party with our Syrian brothers and sisters. We thought this was best done with Kimse Yok Mu who could provide a truck. God willing, this lead to others doing the same and giving food to our Syrian brothers and sisters. For us, it was an interesting wedding dinner”. The father-in-law was also pleased that the couple could start their new life “with such a selfless action”.

The spokesman for Kimse Yok Mu, Hatice Avci, shared that the bride and groom provided the money they received from their families in order to celebrate with the refugees.

The bride, Esra Polat expressed her joy: “I was shocked when Fethullah first told me about the idea but afterwards I was won over by it. It was such a wonderful experience. I’m happy that we had the opportunity to share our wedding meal with the people who are in real need”.

Furthermore, the groom, Fethullah Üzümcüo?lu said: “Seeing the happiness in the eyes of the Syrian refugee children is just priceless. We started our journey to happiness with making others happy and that’s a great feeling”.

The couple were photographed serving food to their guests and sharing with them joyfully.

This act of love and generosity has warmed the hearts of many and it is definitely an inspiration worthy of being replicated.