Meknes- The 4th edition of the National Festival of Ahouach Art will take place from August 10 to 12. 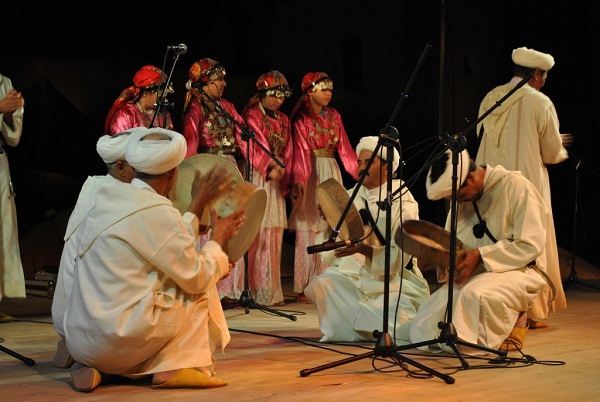 Meknes- The 4th edition of the National Festival of Ahouach Art will take place from August 10 to 12.

The festival aims at preserving Ahouach art as an immortalized heritage that reflects the region’s culture and fosters the development of Ouarzazate.

The festival will include a conference which will operate under the theme of “immaterial heritage in Morocco and Ahouach as a Model”. The festival will also be hosting a series of theater productions, art exhibitions, and musical performances of folkloric troops from the region.

Also, more than 250 artists from well-known bands across the Kingdom will be performing. Bands include “Tamnoukalt from Zagora,” “Ahouach Awaz Awaz from Taroudanet,” “Afouss Ghoufouss from Guelmim,” Ahouach Ahoudjin from Azilal,” “Ahouach Adelssan and Ahouach Ounebla” from Ouarzazate which will also take part in illuminating the magnificence of the culture in the region. There will be also poetry and entertaining activities for children.

Ahouach is a type of folkloric music which is to be played to a dance from southern of Morocco, and performed by men and women who play drums and sing in Tamazight.

Ouarzazate also known as the Moroccan Hollywood, is a city in the southeast of Morocco and is a popular destination for international filmmakers.