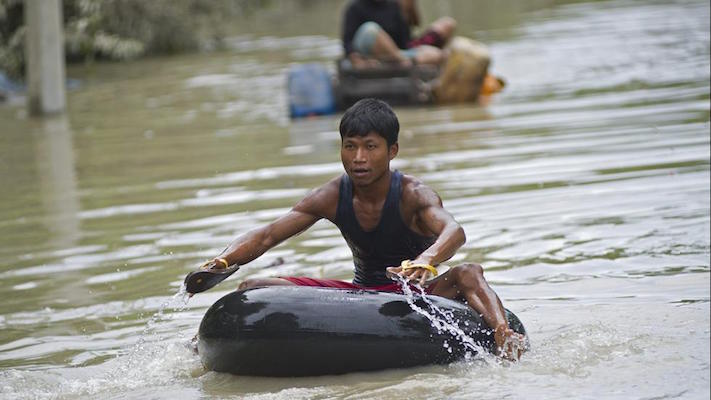 By
Katherine Hall
-
Katie Hall is a student at University of Wisconsin-Madison studying journalism and french.
Aug 5, 2015
Spread the love

At least 435 people have been reported dead in six Asian countries hit hard by the intense flooding from monsoon rains made even worse this year by Cyclone Komen. Combined rains brought over one meter of rainfall in parts of Bangladesh and Myanmar.

In Myanmar, at least 47 people have died with over 200,000 others affected by the floods, which have left the government no choice but to appeal for international assistance on Tuesday.

Many remote areas in Myanmar are still cut off by destruction caused by the floodwaters, leaving thousands of people stranded without relief.

“Logistics are extremely difficult. Assessment teams are having a hard time reaching affected areas,” said Pierre Peron, Myanmar spokesman for the UN Office for the Coordination of Humanitarian Affairs.

In India, at least 200 people have died, according to government officials.

Floods caused two passenger trains traveling in Madhya Pradesh, India to derail on Tuesday, killing dozens of those who were on board. Officials worked through the night to rescue hundreds more trapped inside.

In Pakistan, its National Disaster Management Agency said flooding had affected more than 800,000 people in 2,275 villages, in a statement released on Monday. 139 people have died in floods across Pakistan since July 24.

In Bangladesh, reports state that 28 people have died due to storm-related causes.

While 23 people have been killed in northern Vietnam, floodwaters reportedly have also submerged several coalmines, creating fear that the contaminated runoff could reach and pollute La Hong Bay, according to the New York Times.

Landslides destroyed several villages in Nepal on July 30, leaving at least 30 people dead. About half the homes in the village of Lumle were buried or damaged.

“I heard a big demonic sound, I thought it was an earthquake,” Kabi Ram B.K., a 64-year-old farmer, told Reuters. His daughter and granddaughter were killed when the landslide demolished their home.