Rabat - On August 6, 1945 at 8:15 am, a US B-29 aircraft dropped the world’s first atomic bomb used in war upon Hiroshima, a city home to 350,000 people.  Today, 70 years later at 8:15 am, crowds in Hiroshima stood in silence as bells tolled, remembering the victims and the moment that would change history. 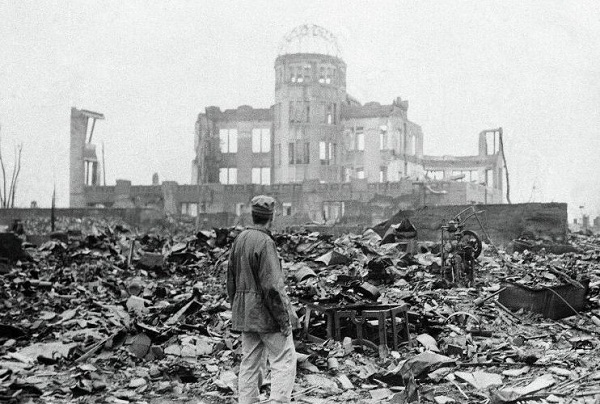 By
Katherine Hall
-
Katie Hall is a student at University of Wisconsin-Madison studying journalism and french.
Aug 6, 2015
Spread the love

Rabat – On August 6, 1945 at 8:15 am, a US B-29 aircraft dropped the world’s first atomic bomb used in war upon Hiroshima, a city home to 350,000 people.  Today, 70 years later at 8:15 am, crowds in Hiroshima stood in silence as bells tolled, remembering the victims and the moment that would change history.

A ceremony was held at Hiroshima’s peace park near the center of the explosion, where PM Shinzo Abe addressed 40,000 people, calling for world peace and nuclear disarmament.

“Today Hiroshima has been revived and has become a city of culture and prosperity,” Abe said.

“Seventy years on I want to reemphasize the necessity of world peace.”

PM Shinzo Abe and Hiroshima Mayor Kazumi Matusi were joined by US Ambassador to Japan Caroline Kennedy for the official ceremony on Thursday, which included silent prayers, the release of doves and a declaration of peace.

Mr. Matsui described nuclear weapons as an “absolute evil”, and urged the world to put an end to them forever.

“To coexist we must abolish the… ultimate inhumanity that is nuclear weapons. Now is the time to start taking action,” he said.

Later in the day, thousands of paper lanterns will be released on the city’s Motoyasu River, to symbolize the victims’ journey to the afterlife.

The bombing on Hiroshima took an estimated 70,000 lives within an hour, and killed around 200,000 people by the end of the year.  On August 9, another bomb was dropped on the city of Nagasaki, killing 40,000 instantly.  Six days later, World War II was over.

The bomb, nicknamed “Little Boy”, destroyed around 90 percent of the city, and was expected to have the force of around 20,000 tons of TNT.

Some were lucky enough to survive the bombing, and are still alive today to tell their stories. As of March 2014, Japan counted 192,719 people as registered survivors, according to the news network Asahi.  Many of them still face illnesses and injuries caused by the bomb.

Following the bombing, the cities of Hiroshima and Nagasaki became known for their high rates of cancers, premature births and malformed babies.

According to NPR, Hiroshima had been chosen by a US target committee to face the atomic bomb due for its compactness and its military facilities.  Good weather over the city on the day of the bombing confirmed the mission.