Miami - US Fast Food Chain “Checkers” is under harsh criticism due to a video posted on YouTube that shows how a female employee of the drive-thru chain acts in an immoral and unsanitary way when prepping a hamburger. 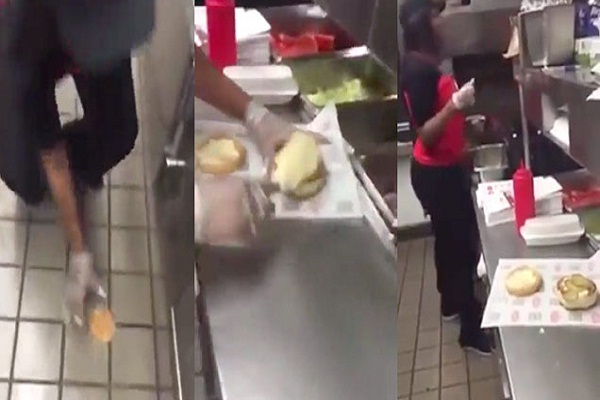 By
Karla Dieseldorff
-
Karla is an award-winning actress and producer.
Aug 6, 2015
Spread the love

Miami – US Fast Food Chain “Checkers” is under harsh criticism due to a video posted on YouTube that shows how a female employee of the drive-thru chain acts in an immoral and unsanitary way when prepping a hamburger.

A 20 second video posted on YouTube has circled the world in less than 48 hours, racking up more than 560,000 views. The video titled in English “Nasty Ass Checkers” is from a “Checkers” Fast Food location in Baltimore, Maryland, USA.

The female employee who sources confirm is 17 years old, laughingly and without any remorse, throws a hamburger bun on the floor and rubs it in. Then places the dirty bun on the prep table and continues to build the hamburger as if nothing happened. Her actions are done completely on purpose, not by accident. Her laughter and that of the person videotaping are shocking.

What’s more, even though she knows she is being videotaped, she continues with her irresponsible and horrible behavior. This video is a disgrace to the fast food chain and poses fear in consumers asking themselves, could this happen to my food?

Her behavior was described by many social media users as “disgusting and unforgivable”. “Checkers” Vice-President of Human Resources Lori Malcolm has declared, “Like you, I’m terrified and disappointed by what I saw in that video”.

As a result, The “Checkers” employee got fired, but that does not solve the problem.

“As a US Citizen, I am repulsed by these images. This type of unacceptable behavior can happen anywhere and it is very sad to know it is happening in my country. I recall the many times I ate at “Checkers” as a teenager and it angers me,” an American student who asked to speak on the condition of anonymity, told Morocco World News.

“ I believe we need to be more careful of who we hire, especially in the service industry. We in the US pride ourselves to follow so many sanitary guidelines, and this is quite shameful,” she added.

Blaming the fast food chain in its entirety would be unfair since the acts of one person are not the acts of everyone, but this video has definitely raised some eyebrows.