Rabat - Foreign Minister Salaheddine Mezouar announced, on Wednesday, that a large movement will involve, in the coming days, around 70% of Moroccan consulates. 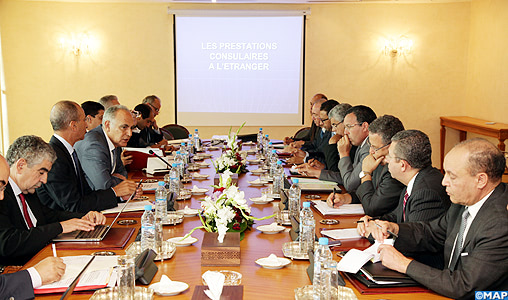 Rabat – Foreign Minister Salaheddine Mezouar announced, on Wednesday, that a large movement will involve, in the coming days, around 70% of Moroccan consulates.

This movement is part of a series of immediate and urgent measures, and others scheduled on the very short term, carried out by the ministry in conformity with the Royal instructions and which will touch on human resources and interaction with the Moroccan community living abroad, in addition to the amelioration of consular quality services, said Mezouar in a statement to the press after a meeting at the Foreign Ministry’s headquarters in the presence of Interior Minister Mohamed Hassad, as well as representatives from the Justice Ministry, the Expatriates and Immigration Ministry and the Government’s General Secretariat.

The consular movement, which is part of immediate and urgent measures related to human resources, will be based on the criteria of responsibility, equality and competence contained in the speech delivered by King Mohammed VI on the 16th Throne Day, said Mezouar, noting that the least productive staff will be recalled to the central administration and those who stand out will be promoted, in addition to reinforcing the presence of women and youth within consulates.

At the central administration level, the minister said that consular affairs services will be re-structured and their capacities and competences will be consolidated, adding that audit missions will be dispatched this week to consulates to assess the output of consular civil servants and local agents on the basis of competence, transparency and devotion to serve the Moroccan diaspora.

The urgent measures seek to rejuvenate consular staff (around 30 young people) starting next November following a three-month training, in addition to including expats’ sons to practice within the consulates, he said, noting that these young executives were selected in accordance with legal provisions.

As part of measures taken at the level of interaction with the Moroccan community abroad, the minister announced that, as of Aug. 17, a toll-free number will be available to receive expatriates’ complaints and requests, in addition to setting up as soon as possible a mechanism in charge of file follow-up.

King Mohammed VI had underlined, in a speech to the Nation on the 16th anniversary of the sovereign’s accession to the Throne, the need to remedy the problematic situation in some consulates, reaffirming his will to protect the interests of the Moroccan community abroad.

“I urge the Minister of Foreign Affairs to take firm action and remedy the problematic situation in some consulates,” the King had said.