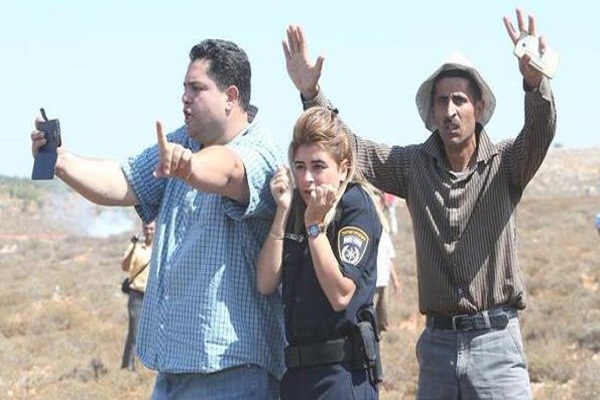 The moving picture surfaced on social media on Sunday and was taken by photographer Shaul Golan for Israel’s Yedioth Ahronoth newspaper.

The photo shows two Palestinian men who stepped in to protect an Israeli policewoman after clashes between anti-occupation activists and right-wing settlers broke out near the settlement outpost of Aish Kodesh, and the Palestinian village of Kusra.

Aish Kodesh, located in the West Bank, is considered by the United Nations and International Court of Justice to be part of the occupied territory, according to the Independent.

As of this writing, the picture has been shared at least 2,300 times on the Facebook page of an Israeli journalist named Igal Sarna.

One of the men sheltering the Israeli officer was Zakaria Sadah, a Palestinian field worker for Rabbis for Human Rights (RHR), an Israeli human rights organization.

“Amid all the chaos, I saw this female officer,” photographer Shaul Golan told the Times of Israel. “She was really scared. She was abandoned in the field and her so-called enemies were guarding her. I knew right away it was a special moment.”