Rabat - An Israeli terrorist has been given a six-month administrative detention order on Wednesday in connection to his involvement in the death of an 18-month-old Palestinian infant. 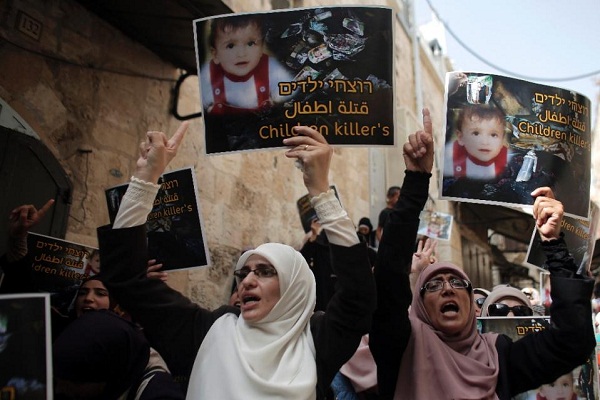 Rabat – An Israeli terrorist has been given a six-month administrative detention order on Wednesday in connection to his involvement in the death of an 18-month-old Palestinian infant.

Mordechai Meyer from the West Bank settlement of Maaleh Adumim was placed on administrative detention, a procedure which allows authorities to detain suspects indefinitely and without trial.

He was accused of his involvement in an arson attack last week on a Palestinian home in the West Bank that killed 18-month-old Ali Saad Dawabsha, injured his parents and four-year-old brother.

A statement issued by the Israeli Defense Ministry said the 18-year-old was being held because of his involvement in violent activities and recent terror attacks.

According to the country’s security service, Shin Bet, the Israeli terrorist was previously arrested in connection with an arson attack on a Catholic Church in northern Israel and is also suspected of involvement in attacks on Palestinian homes.

The Administrative detention dates from British-mandated Palestine. The controversial procedure is usually reserved and applied against Palestinians.

According to official figures, 379 of the 5,686 Palestinian prisoners held in Israeli jail are on administrative detention.

Arab foreign ministers at a meeting in Cairo on Wednesday agreed to call on the United Nations to protect the Palestinians from “terrorist crimes” by Israeli settlers.