Rabat - Finnish singer Nia Chailin, esteemed in the Kingdom for singing about the beauty of Morocco and its Sahara in Arabic and Amazigh languages, will perform at Casablanca Festival to celebrate the King’s birthday on August 21st. 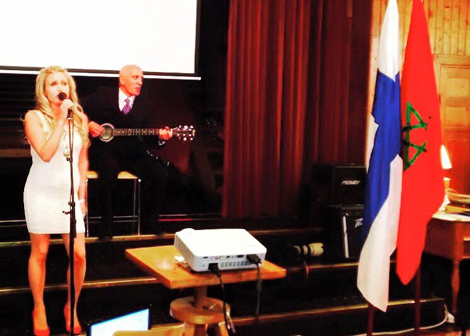 By
Larbi Arbaoui
-
Larbi is a freelance writer and assistant editor at Morocco World News.
Aug 8, 2015
Spread the love

Rabat – Finnish singer Nia Chailin, esteemed in the Kingdom for singing about the beauty of Morocco and its Sahara in Arabic and Amazigh languages, will perform at Casablanca Festival to celebrate the King’s birthday on August 21st.

According to the Finnish MTV website, Chailin has been invited to sing at the Casablanca Festival that will be organized to commemorate King Mohammed VI’s birthday on August 21st.

In one of her songs entitled “Ana Maghrebia,” (I am Moroccan), the Finnish singer used authentic Moroccan dialect along with French, English and Spanish.

The lyrics of the song can be translated into English as follows, “I am Moroccan, I am sociable and I don’t want you to play tricks on me.”

Chailin, who is married to Isham Jonsiin, music producer and composer of Moroccan origin, sings another beautiful song entitled “Habibi Chouffia” (My Lover Look at Me) in Moroccan dialect with oriental music.

She posted a photo of herself in front of the stage set up in the center of Casablanca, with a statement that reads “the scene is getting ready”.

Chailin, 31, is a native of Helsinki, Finland’s capital city, but she has lived for many years in France and the United States.

The Finnish singer, who is now in Casablanca preparing for the event where she will meet her Moroccan fans for the first time, is expected to perform one of her new songs about Moroccan Sahara.

Brought up in a family of professional musicians, Chailin has released many songs since 2009 when she recorded her first album.