Miami - Evangelical Pastor James McConell who has been under fire for months since his offensively insulting remarks about Islam during a sermon, is now formally charged by Belfast court, Ireland. McConnell depicted Islam as “satanic” and “heathen” and said “it had been spawned in hell”. 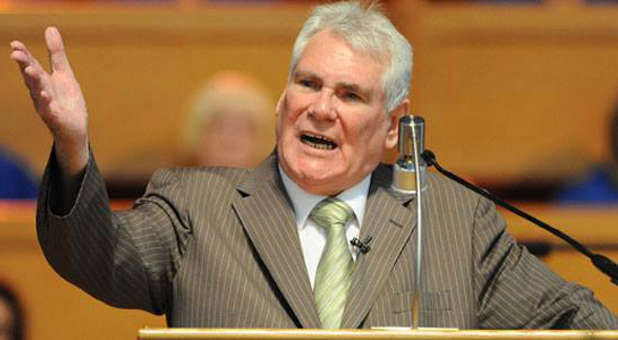 By
Karla Dieseldorff
-
Karla is an award-winning actress and producer.
Aug 9, 2015
Spread the love

Miami – Evangelical Pastor James McConell who has been under fire for months since his offensively insulting remarks about Islam during a sermon, is now formally charged by Belfast court, Ireland. McConnell depicted Islam as “satanic” and “heathen” and said “it had been spawned in hell”.

His controversial sermon at the Whitewell Metropolitan Tabernacle in Belfast last year was streamed online. McConell has also posted written insults about Islam that have caused controversy. The Pastor appeared before the Belfast Magistrates Court to confront accusations.

Around 1,000 protesters in support of McConnell were gathered around the court chanting and holding signs in his favor.

According to RTE News, the 78 year-old Preacher’s Defense Lawyer, Joe Rice declared to District Attorney Judge Amanda Henderson that the his client was denying the accusations saying he was just expressing “his own personal views”.

Rice affirmed that McConnell “had not incited hatred nor had he encouraged violence against Muslims”. McConell “strenuously denied” any moral or legal charges.

The Preacher defended himself outside the court in front of his supporters by declaring to RTE News that these accusations against him were “absolutely stupid.”

“There has been a reaction of anger” in his support “even from atheists, even from people that don’t go to church”. He condemns these charges as “ridiculous,” he said.

The Pastor also told the court that he was taking a “principled stance” appealing to freedom of speech. He believes that “he has every right to criticize Islam, as Islamic clerics have the right to entice him”.

Some sources have even said that McConnell could face up to six months in jail for his remarks. The case was adjourned until September 3, 2015.

“Freedom of speech may allow someone to express their views, but it does not give the moral right to horribly offend an entire group of people with gross insults. Positions of power, whether in politics or religion need to be exercised with caution to avoid provocations and extremist results,” an American professor, who asked to speak on the condition of anonymity, told Morocco World News.

“To be an example to thousands of followers, there are responsibilities that comes with freedoms. It is always preferred and best regarded as respectful to further personal views that promote peace and unity,” he added.