Rabat - The father of the Palestinian toddler who was killed last week by Israeli settlers in the West Bank succumbed to his injuries on Saturday. 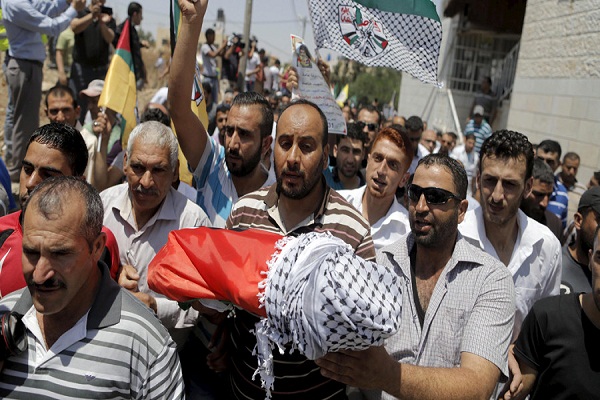 Rabat – The father of the Palestinian toddler who was killed last week by Israeli settlers in the West Bank succumbed to his injuries on Saturday.

Saad Dawabsha passed away in hospital in the southern Israeli city of Beersheba where he was being treated for third degree burns.

“Before the funeral in the Dawabshas’ home village, a post-mortem will be conducted to provide evidence for a complaint to the International Criminal Court (ICC) in The Hague.”

Dawabsha reportedly saved his wife and 4-year-old son. However, he failed to save his 18-month-old infant Ali, who died in an arson attack carried out by Israeli right wing terrorists in the occupied West Bank.

His wife Riham Dawabsha and four-year-old son Ahmed are still fighting for their lives in the hospital.

On Wednesday, Mordechai Meyer, an Israeli terrorist was given a six-month administrative detention order in connection to his involvement in the killing of the Palestinian toddler. He is from the West Bank settlement of Maaleh Adumim.

At a meeting with Palestinian President Mahmud Abbas in Cairo on Wednesday, Arab foreign ministers consented to calling on the United Nations to protect the Palestinians from “terrorist crimes” by Jewish settlers.