Casablanca - In the last few weeks, negative headlines concerning the violation of women’s rights in the Kingdom of Morocco have been dominating the Moroccan media landscape. 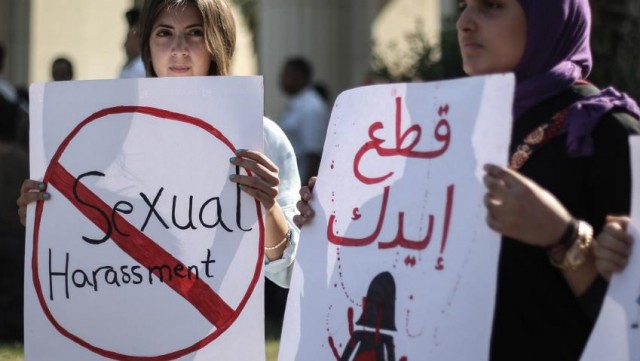 Casablanca – In the last few weeks, negative headlines concerning the violation of women’s rights in the Kingdom of Morocco have been dominating the Moroccan media landscape.

Although sexual harassment has been discussed over and over again, it remains an issue that women continue to endure on a daily basis. Women walking alone on the streets often times find themselves in a rush, not enjoying a simple walk due to fear of being harassed.

It is a serious problem for Moroccan society that women feel unsafe or frightened to walk on the streets. In spite of that, it is believed that catcalling is difficult to prevent since it has been embedded into the culture. It has become a habit.

Equally important to note, street harassment affects all women regardless of age, shape, appearance or race. Yet, Moroccan women rarely talk about this openly because it is seen as embarrassing and the woman‘s own fault.

On the streets, every female is literally on her own when a man approaches her uninvitedly. Some people think the woman likes the attention, while others simply do not care to intervene as it does not concern their own private space.

The testimonies below further prove that this can no longer be tolerated. This is what some Moroccan women have to say on sexual harassment:

Leila A. (22), a translation student in Rabat says: “I see it and live it every day. It makes me crazy and it makes me want to punch them. Sometimes I try to not pay attention and it doesn’t really bother me. But sometimes when I am alone in some weird streets or when it gets dark outside, I get scared because the harassment might go a bit too far.”

Saadia H. (44), a housemaid from Rabat openly expresses: “I feel that Moroccan men are sexually frustrated. Not all, but the ones that harass women in a rude manner.

By that I mean, those following you around like stalkers, even touching you or verbally insulting you and putting you down. I got used to it, but when I see girls being harassed, I can only shake my head. May God give us the patience we need. That’s all I can say.”

Jihane B. (35), a secretary from Casablanca says: “I think it’s a shame that in the year 2015 some men still don’t know the difference between flirting and sexual harassment. I have been harassed a lot. It’s frightening! You can wear whatever, and they would still annoy you and stare at you. I wish there would be more policemen out there. Maybe this will keep those men at ease.”

Fouzia R. (15) a high-school student from Casablanca says: “In my opinion, men harass women because they have some problems with their self-confidence. I once talked to my elder brother about this and he told me, ‘I would never run after a woman on the street that clearly feels uncomfortable with the situation, nor would I give compliments to a stranger. I have pride.’

So, I think that if men would think more like my brother, sexual harassment in Morocco could be lessened. Parents have to teach their sons respect and values at ayoung age… I guess a lot of parents don’t have those conversations with their sons in their early stages of puberty, in regards to sex, women and respect…”

Saadia F. (52), a housewife from Casablanca says: “It hurts Morocco. It hurts the citizens. It shouldn’t exist, but we somehow have to live with it. I always tell my daughters to be careful and to run away if someone is approaching them inappropriately. My two daughters are taking self-defense classes. I think a woman should know how to defend herself. Morocco is a beautiful country, but as you can see it’s a country that still needs a lot of improvement.”

Maryam N. (29) a mother says: “During my pregnancy, I thought men would understand that I am married and leave me alone, but I was always bothered by horrible comments that I do not want to recall at the moment. Sexual harassment is everywhere in Morocco and all women suffer from it, even young girls and also pregnant women. It’s a nightmare.”

These candid testimonies depict the reality of a nation where women are being molested.A video produced by GlobalGirlMedia called “Breaking The Silence: Moroccans Speak Out on Sexual Harassment” serves as a good starting point to pressure society to act upon this ongoing issue with concrete and permanent solutions.