Rabat - A new petition has been launched recently, calling Google to correct the Moroccan map by removing the line that separates the Kingdom from its Sahara. 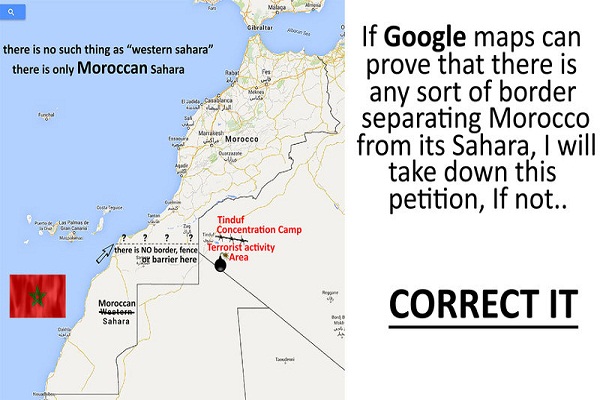 By
Aziz Allilou
-
Aziz Allilou is a student at the Higher Institute of Media and Communications (ISIC) and Morocco World News correspondent in Rabat.
Aug 10, 2015
Spread the love

Rabat – A new petition has been launched recently, calling Google to correct the Moroccan map by removing the line that separates the Kingdom from its Sahara.

Whenever Moroccans search the Internet, they feel hurt to find the map of their country split into two parts; the Northern part being designated as Morocco and the Southern part named the Western Sahara.

This recognition of the Polisario Front separatist movement is a bias against Morocco’s territorial integrity and seen as unfair by Moroccans.

In this regard, activists have launched a campaign urging Google to correct this mistake on Google Maps. Hundreds of Moroccans have signed the petition so far.

In a letter, the petitioners challenged Google to prove the existence of a border, fence or barrier-crossing line as they falsely represent it on their map search tool.

The petitioners explained the world needs to know that there is no such thing as “Western Sahara”, only “Moroccan Sahara”. “Also, there is no authority other than the Moroccan government who governs its southern provinces.”

“Google is not a political organization to represent political points of viewon world maps; it is rather a search tool to reflect geographical realities of sovereign countries,” the letter concluded.

The activists behind this cause, which was launched last week, called on Moroccan citizens around the world and all friends of Morocco to sign and share this petition to “tell Google that they are simply wrong.”

In 2013, a similar petition was launched by activists on Avaaz. The petition called for the correction of Morocco’s map on Google Maps and Facebook.

The petition which was signed by over 3,000 people also called on all Moroccan internet users to upload the official, correct and intact map of Morocco on all digital platforms on the web, to serve as reference in all major search engines.

Marsad was the first website to publish the correct map of Morocco on maps.google to facilitate the observation of the 2011 Parliamentary elections about the integrity of the Moroccan territory.

While waiting for an official correction of the complete map of the Kingdom by Google and Facebook, Software Centre Company, the founder of www.marsad.ma developed a new map with the actual boundaries, including the Sahara.