Casablanca - Lucie (left), Juliette (middle), and Elisa (right) are three rising YouTube stars from France that are known for their original and unique way of covering modern pop songs. 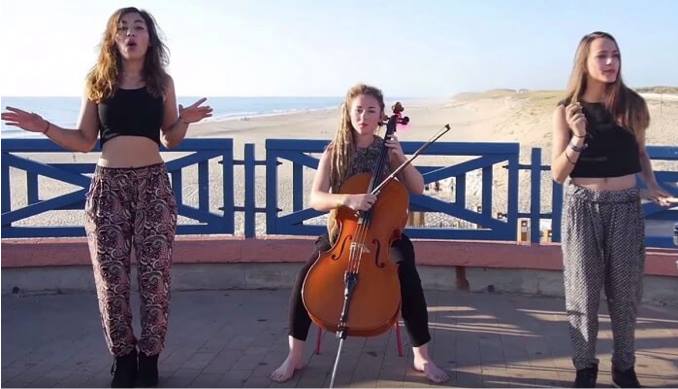 Casablanca – Lucie (left), Juliette (middle), and Elisa (right) are three rising YouTube stars from France that are known for their original and unique way of covering modern pop songs.

The three young ladies are childhood friends who grew up in Seine Saint Denis, northeast of Paris. All three are passionate musicians and singers. The covers and mashups they have published so far on their YouTube channel are extremly popular.

One year ago, the first cover that brought attention to Lucie, Juliette and Elisa was “Tous les mêmes,” originally by the Belgian singer, rapper and songwriter Stromae:

Consisting of three very talented young women , the trio harmonizes perfectly with two singers (Lucie and Elisa) and a cellist (Juliette). Moreover, with thousands of subscribers on Youtube and on their Facebook page , these fresh talents have the opportunity to achieve great things in the near future. The young women are beautiful, humble, and most importantly, talented. As a trio, they have virtually entertained many internet users over the past months.

This trio is known by the name: LEJ – pronounced “Elijay.” The three letters are simply the initials of their first names. In an interview with Youmanbeing.net, the trio stated: “Before we put a video online, we practice many times. […] When we choose songs, we try our best to make them suitable to our identity…”

The female trio wants to give pleasure to people while doing what they love: music. Since all of their videos are either mashups or cover songs, fans begin to wonder when the girls will produce some music on their own. LEJ revealed to Youmanbeing.net that they are working on some songs, but “it is perhaps a little too early to get them out. We have to get even better to come up with good productions to please the public…”

LEJ has managed to win plenty of hearts from a vast public, both in France and abroad. For the moment, their recognition remains largely on the internet. Nevertheless, when LEJ performs during festivals, the number of people attending is increasing little by little. And LEJ also already made a celebrity friend: Pharrel Williams.

Currently, LEJ’s mashup of several summerhits of 2015 has made a buzz: