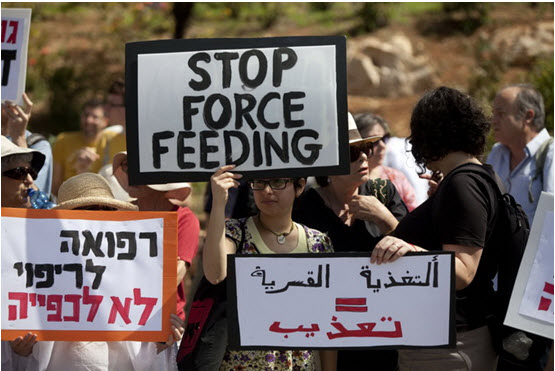 This comes after Israeli legislators voted in favor of a controversial bill in June, commanding local authorities to force-feed Palestinian prisoners who are on hunger strike.

Moroccan health professionals along with human rights activists have addressed Ban Ki Moon in an open letter, asking the United Nations to take action against this new law.

The open letter said that this move is a “gross violation of human rights” and considered it a “form of torture which is criminalized in the International Human Rights Law.”

The letter pointed out that “Health professionals around the globe are committed to the ethical statement which prohibits any use of the medical profession for torture.”

The letter also appreciated the professional stance of Dr. Leonid Eidelman, Head of the Israeli Medical Association who called on doctors to ignore the new law.

The Israeli Medical Association remains firmly opposed the new law. It called this new measure “torture” and vowed to appeal the legislation.

Dr. Leonid Eidelman wrote to the Israeli Minister of Justice YeletShaked, saying the proposed law “places responsibility on the doctors to take actions despite the active objections of the detainee.”

“Parenteral (intravenous) nutrition administered to a patient capable of judgement against his will isn’t ethical and uses humiliating means bordering on torture,” Eidelman concluded.

Israeli’s Ministry of Public Security, who put the bill forward, said it was a human move to “prevent prisoners from harming themselves and from pressuring the Israeli authorities.”

In fact, multiple media reports suggested that Israelis fear hunger strikes in Israeli prisons could end up in deaths and thus trigger waves of protests in the occupied West Bank and East Jerusalem.