Miami - On August 10th, a rarely seen vintage video from 1965 surfaced on YouTube under the name “The Last Jews of Morocco Rare Archive 2015 HD.” The sepia-toned video is “an account of the last days of an ancient Jewish community” presented by The United Jewish Appeal (UJA). 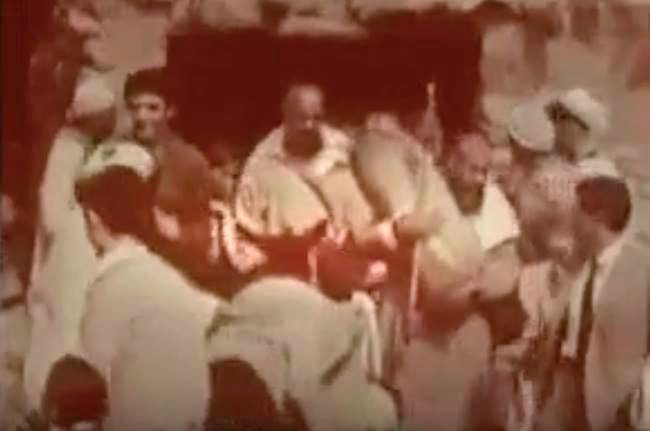 By
Karla Dieseldorff
-
Karla is an award-winning actress and producer.
Aug 13, 2015
Spread the love

Miami – On August 10th, a rarely seen vintage video from 1965 surfaced on YouTube under the name “The Last Jews of Morocco Rare Archive 2015 HD.” The sepia-toned video is “an account of the last days of an ancient Jewish community” presented by The United Jewish Appeal (UJA).

Produced and directed by Arnan Zafrif, fully narrated by Herbert A. Friedman, Executive Vice-Chairman of the UJA, the video seems to have been made as a call-to-action in order to raise $109.4 million to get Jewish population of the time out of Morocco.

The video opens with beautiful images of Casablanca “The Jewel of Morocco” and quickly contrasts them with images of the “Mellah of Casablanca,” the ‘city inside the city’ or as Friedman calls it, “the ghetto, crowded, squalid, dark” area where 60,000 Jews once lived .

Life conditions for the Jews of the “Mellah” are depicted as “poor, bearing on misery;” it was “the way of the world.” The poor remained poor and everything remained the same generation after generation; until 1943 when American Jews intervened and helped this Jewish community.

The Joint Distribution Committee of the United Jewish Appeal brought them help in much-needed ways. The video shows distribution of food, medicines, education, parks for recreation, crafts, markets, etc. The modern world of the era had come to the “Mellah.” Children dancing and singing; simply enjoying life among Jewish traditions and prayers.

Friedman claims that this prosperity came to a halt in 1955 when the French left Morocco. This changed the life of the Jews; now they were living within “an independent Arab state.” Aside from the “Mellah of Casablanca”, many other villages located in the High Atlas mountains of Morocco where populated by Jews. Villages are described as isolated. “A few hundred miles and 20 centuries behind from Casablanca.”

These Jews ”were now living in fear.” Morocco’s independence was great for the Arabs, but not for them, according to the video. This change brought a new awakening of survival and freedom to their communities. The well-off and educated Jews were concerned for the elder, as well as their own children. According to Friedman’s account, this sentiment was felt throughout Morocco, especially in the village of Agouim, where the rest of the video centers its attention.

Even in the mid 1950’s, Agouim was the typical Jewish village of biblical times with farmers, herdsmen, workers of the land, and followers of the Jewish law. The UJA shows us fragments of what is known as the Exodus of Jews from Morocco.

This so-called Exodus was well-planned and entire Jewish villages packed their lives, their “Holy Scrolls,” even signs on door posts were removed, and they left at nighttime amidst a mix of commotion, fear, and uncertainty.

Interestingly, the Jews of Morocco did not abandon their villages without a “farewell visit” to pay respect to the “graves of the fathers” with chants and prayers. We see how “rosters” of villages were taken to account for every Jew.

Families remained together and off they parted from their once Jewish villages, in search of a new life. They left on donkeys and by foot along with their belongings. The villages of the High Atlas like Agouim were now empty. Entire Jewish communities of every social status boarded “tourism” buses that drove them out to shore.

They crossed the seas aboard large boats. Friedman narrates that more than 250,000 Jews left Morocco at the time.