Rabat - Lionel Messi, Cristiano Ronaldo and Luiz Suarez have been announced as the final three nominees for the 2014-15 UEFA Best Player in Europe award. 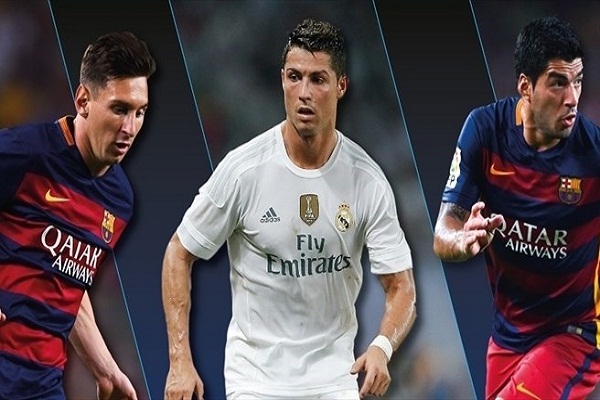 Rabat – Lionel Messi, Cristiano Ronaldo and Luiz Suarez have been announced as the final three nominees for the 2014-15 UEFA Best Player in Europe award.

Ronaldo, the leading marksman in the Spanish topflight who won the trophy last year, is again a candidate after a season in which he scored 61 goals in 54 appearances.

Messi managed to break Telmo Zarra’s record of 251 Liga goals with a hat-trick against Sevilla on 22 November. He also netted 58 goals in all competitions, including a double in the Blaugrana’s Copa del Rey final victory against Athletic Club.

Uruguay international formed a lethal trio with Neymar and Messi which yielded 122 goals for Barcelona in all competitions last season. The former Liverpool man began the campaign by scoring in the 5-4 UEFA Super Cup win over Sevilla.

Ronaldo and the Barca duo finished ahead of Juventus goalkeeper Gianluigi Buffon, Neymar and Eden Hazard in the race for the prestigious award.

The UEFA Best Player in Europe is voted for by journalists from all 54 of Uefa’s member associations.

A jury will cast their votes for the outright winner during the 2015-2016 UEFA Champions’ League group stage draw in Monaco on Thursday 27 August.