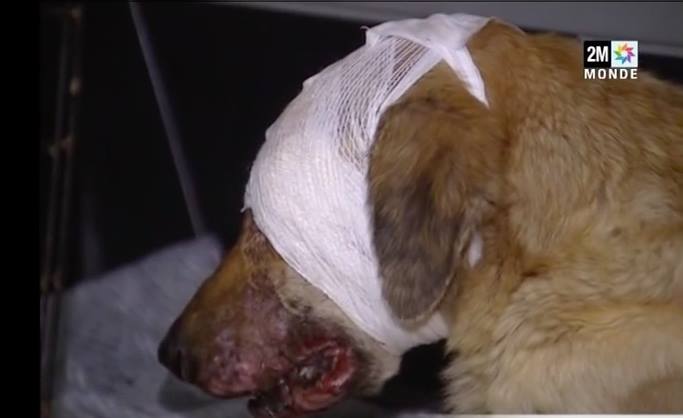 Marrakech – Morocco has a real problem when it comes to animal welfare. The way some people in Morocco treat animals is morally wrong and totally indefensible. There are cases of the abuse and merciless torture of animals and, most often without a second thought.

Presumably the idea is that we are superior simply because we are humans, so we are entitled to do whatever we want to animals. Many hold the idea that animal interests don’t count at all in modern Moroccan society.

This is not about whether animals should have the right to vote, get married, have a good education or have seats inside parliament, but about establishing the idea that their fundamental rights and interests should be respected, while punishing the oppressor. Oppression is oppression no matter what or who it’s forced upon.

No one can deny that animals have emotions, as the English philosopher Jeremy Bentham once said “It may one day come to be recognized that the number of legs, the villosity of the skin, or the termination of the os sacrum are reasons equally insufficient for abandoning a sensitive being to [a grim] fate. What else is it that should trace the insuperable line? Is it the faculty of reason, or perhaps the faculty of discourse?

But a full-grown horse or dog is beyond comparison a more rational, as well as a more conversable animal, than an infant of a day or a week or even a month, old. But suppose they were otherwise, what would it avail? The question is not can they reason? Nor can they talk? But can they suffer? Why should the law refuse its protection to any sensitive being? The time will come when humanity will extend its mantle over everything which breathes.”

There are things that are morally wrong to do to animals, standard practices that happen every single day in Moroccan society:

– Castration: (also known as Gonadectomy) probably the most common procedure carried out  on cattle across the world. It is any action, surgical, chemical or otherwise, by which a biological male loses use of the testicles. Castration involves the removal or destruction of the testes and is carried out in order to stop the production of male hormones.

– Ear cropping: the removal of part or all of the pinnae or auricles, the external visible flap of the ear, of an animal. Most commonly performed on dogs.

– Tail docking: intentional removal of part of an animal’s tail. Tail docking occurs in one of two ways. The first involves constricting the blood supply to the tail with a rubber ligature for a few days until the tail falls off. The second involves the severance of the tail with surgical scissors or a scalpel.

– Cockfight: a blood sport in which two roosters (cocks), specifically bred to be extremely aggressive, are placed beak to beak in a small ring and encouraged to fight to death.

– Dog fighting: a blood sport opposing two game dogs against one another to fight in a ring or a pit for the entertainment of the spectators. The dogs literally bite and rip the flesh off of one another and may fight to death.

– Unconfined street animals: another problem in our society, since a vast number of street animals in Morocco are neglected, abandoned, poisoned, become victims of cruelty, not vaccinated and non-sterilized. They are often thin and hungry with broken bones and open wounds.

Many of them are sick and diseased and may be kicked, hit or stoned if they come near people. Not only do these animals face the brutality of the streets, but also campaigns of poisoning, electrocution, drowning, starvation and other cruel methods that have been used to dispose of unwanted animals.

– The use of animals in witchcraft and sorcery: witches use animals in spells, and the making of potions and concoctions. As a result, animals have their tails, eyes, beaks, horns and toes taken off.

Hundreds of animals live under these cruel conditions, as if there was a war being waged against animals. Such practices make animals suffer both physical and mental torment. Animals are not only being kicked, whipped into submission, beaten, heads bashed against the wall and electrocuted, but also forced to live in terrible conditions and enslaved in cages. As a society, are we oblivious to the needs of these animals? Are we that brutal?  Are we that uncreative when it comes to solving those issues? Are we that ineffective to adopt any animal welfare legislation?

From a religious point of view, the Abrahamic religions of Islam, Judaism and Christianity strongly ask individuals to treat animals with compassion and not to abuse them.  For instance, in Islam, the Prophet Muhammad (peace be upon Him) exhorted Muslims to show kindness and compassion towards animals and birds, and repeatedly forbade cruelty towards animals, saying “whoever is merciful even to a sparrow, Allah will be merciful to him on the Judgment day.”

Also, the Holy Quran states that animals form communities, just as humans do: “there is not an animal that lives on the earth, nor a being that flies on its wings, but they form communities like you. Nothing have we omitted from the Book, and they all shall be gathered to their Lord in the end,” (Quran 6:38).

Speaking of similarities, no one can deny that animals and humans share things; both of them can think, love, make choices, communicate and feel.

As a matter of fact, both of them can feel pain, pleasure, fear, frustration, loneliness, happiness and maternal love. For all these reasons, animals should have the same fundamental rights as humans. Animals have the right to live free from pain and suffering, and have the right to fulfilled lives in terms of their biological, physical, social and emotional needs. It’s time humans faced the suffering they have inflicted on animals.

Thankfully, there is a glimmer of hope, as some associations and non-profit organisations are devoted to the welfare of the country’s animals, as well as promoting nature conservation:

– AHPAE (Association for the Protection of Animals and the Environment) has kennels and catteries to care for homeless animals until they are adopted.

– The administrative center of SPANA, which is located in Temara, with many branches in Rabat, Marrakech, Khémisset, Chémaia, Khénifra, Tanger, Midelt, Had Ouled Frej, Sidi Boughaba and Casablanca. SPANA promotes the proper care of animals in the work environment as well as companion animals.

– HSAM (Help the Street Animals of Morocco) was founded in 2006 by Claire Sedgwick, a Registered Veterinary Nurse and her partner, Rob White. They both created an environment in Essaouira City that benefits both the human and animal populations. They provide medical consultations and treatment, including hospitalization of stray animals as well as a health check and treatment for injuries and parasites, e.g. fleas and ticks.

These groups have made it clear that animals should be part of Moroccan society, because we both share the same living spaces. Citizens from all ages and backgrounds must protect animals by treating them in a merciful, compassionate way, and by allowing them to peacefully live their lives.

Everyone should participate in saying “that’s enough” to the abysmal acts, and anyone who mistreats, beats or abuses animals should be prosecuted. God created us with inherent rights, such as life, liberty and the pursuit of happiness, a fundamental concept that applies to every creature on the surface of the earth. If we can’t realise this on earth, at least we can help by reducing or eliminating actions that contribute to the abuse of animals. We must protect animals by creating more shelters, building veterinary hospitals and getting involved in local animal rights organisations.