Morocco World News
Home Highlights on Morocco King Mohammed VI: Coming Elections Will Be Crucial For the Future of...

Tétouan  -  The coming elections, which will be held in a few days, will be crucial for the future of Morocco, given the extensive powers granted by the Constitution and the law to regional councils and local communities, said the King Mohammed VI. 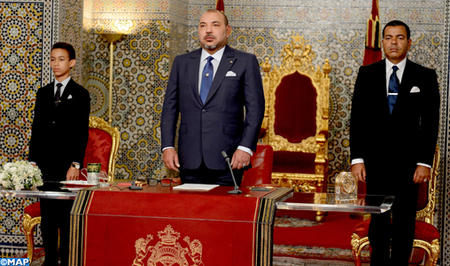 Tétouan  –  The coming elections, which will be held in a few days, will be crucial for the future of Morocco, given the extensive powers granted by the Constitution and the law to regional councils and local communities, said the King Mohammed VI.

The citizens have the right to know everything about the institutions serving them, so that they may make the right decision and the right choice, said the sovereign in a speech on Thursday on the occasion of the 62nd anniversary of the Revolution of the King and the People.

The King highlighted the mission and role incumbent upon each and every institution and the impact it is set to have on the lives of citizens, underlining that the Government is responsible for implementing laws, developing public policies, drawing up sectoral plans and is also responsible for public administration.

The government, which has a duty to improve administrative services and bring them closer to the citizens, is not responsible for the quality of services provided by elected councils, said HM the King.

Citizens have to be aware that the people in charge of these social and administrative services, which they need in their everyday life, are the people they voted for in their community or region, His Majesty stressed, adding that, contrary to what some citizens think, members of Parliament have nothing to do with the management of local affairs. Their duty is to propose, discuss and pass laws, monitor Government action and assess public policies.

If many citizens take only scant interest in elections and do not participate in them, it is because some elected officials do not fulfill their duties properly, the sovereign noted, stressing that elected officials must work hard on a daily basis and make extra efforts, since they are in charge of other peoples’ interests, not their own.

The monarch explained that votes should not go to those who speak more or louder than others and repeat empty slogans; nor should they go to those who hand out a few dirhams during electoral campaigns and sell false promises to the citizens, but rather to competent, credible candidates, who are committed to serving the public good.

As our country prepares to embark on a new revolution, the implementation of the advanced regionalization plan will be the cornerstone of Morocco’s unity and territorial integrity and will help us achieve social solidarity, as well as balance and complementarity between regions, the sovereign noted.

Since every era is determined by its men and women, the coming revolution will need honest elected representatives whose main concern is to serve the nation and the citizens who voted for them, the King said.