Miami - On August 21 around 6:00 pm a man later identified as Moroccan opened fire onboard a high-speed train with destination to Paris, resulting in two people injured, and French actor Jean-Hugues Anglade who suffered a small injury. The train had departed from Amsterdam. 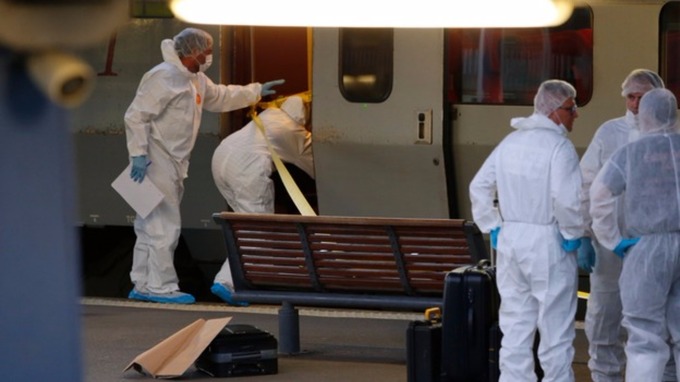 By
Karla Dieseldorff
-
Karla is an award-winning actress and producer.
Aug 21, 2015
Spread the love

Miami – On August 21 around 6:00 pm a man later identified as Moroccan opened fire onboard a high-speed train with destination to Paris, resulting in two people injured, and French actor Jean-Hugues Anglade who suffered a small injury. The train had departed from Amsterdam.

The alleged shooter known to police is a 26 year-old man of Morocco. He was armed with a Kalashnikov rifle and an automatic pistol with nine magazines holding almost 300 rounds; he opened fire several times. According to AFP his identity has been confirmed, but further investigations will be conducted by counterterrorism authorities.

Two American soldiers who were aboard the train took the shooter down after hearing him reload a gun in the bathroom. The soldiers who are US Marines prevented them man from a larger massacre. One of the Marines was shot in the neck by the shooter and his life remains in very critical condition. The gunman was arrested into custody at the Arras train station where the train was diverted after the attack. He has remained silent.

According to the spokesman of French Minister of the Interior Pierre-Henry Brandet, “one person was critically injured, his life is in danger” and the other “has less serious injuries”. It is reported the critically injured passenger is British.

French actor Jean-Hugues Anglade was reportedly in “shock” as he heard gunfire in the car next to him. He reacted by pulling the alarm, which resulted in small injuries due to the alarm’s broken glass. A friend of Anglade has said the actor is doing fine.

A subsididary of SNFC (French railways) sent a tweet on social media declaring “travelers are safe, the situation is under control. The train is stopped and the emergency services are in place”. The train known as Thalys was rerouted to the Arras station in northern France, where 150-200 passengers were unloaded with their luggage.

After the attacks to French newspaper Charlie Hebdo and the 17 deaths at the Parisian supermarket Hyper Kosher, this train shooting has put authorities on sensitive alert; and a counterterrorism plan has been put into effect in all public places.