Rabat -Police were forced to step in to halt the violence that broke out in the stands of the Mohammed V Stadium during Raja Casablanca's draw against Hilal Benghazi of Libya on Wednesday. 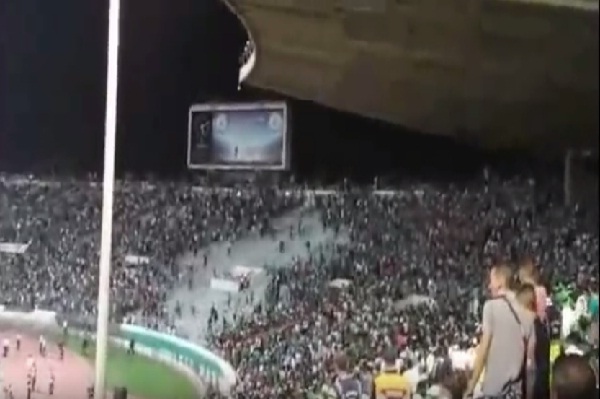 Rabat –Police were forced to step in to halt the violence that broke out in the stands of the Mohammed V Stadium during Raja Casablanca’s draw against Hilal Benghazi of Libya on Wednesday.

Raja has been crowned winners of the 2015 North African Football Union (UNAF), but the championship fixture between the two teams was marred by scenes of crowd violence.

In a video posted to YouTube, the team’s fans can be seen throwing flares at each other. The police stepped in when the scenes in the stands turned ugly.

Police were said to have arrested at least nine troublemakers, including a minor. Some police officers needed hospital treatment after they were injured when the trouble erupted.

Raja Casablanca claimed the North African Football Union title after two victories against Egypt’s Al Ismaily (1-0) and Tunisia’s Club African (2-0) and a draw against Hilal Benghazi in the tournament that was held in Casablanca since August 14.

Al Ismaily came second with four points after their 4-0 victory against Hilal Benghazi and a draw with Club African 2-2. The Tunisian side finished in third place, while Hilal Benghazi ended last.