London - At an evening concert during the Fes Festival of World Sacred Music, bemused European tourists and enthusiastic Moroccans sit side by side and watch the musicians enter holding candles. At a festival in Australia, the audience gazes open-mouthed as the rhythm gains pace and a woman in blue begins to trance, her long hair brushing the floor of the stage as she sways her head from side to side. In a house in Fes, teenage boys in fake designer caps and sneakers sit with their master learning the chants of the Sufi brotherhood. 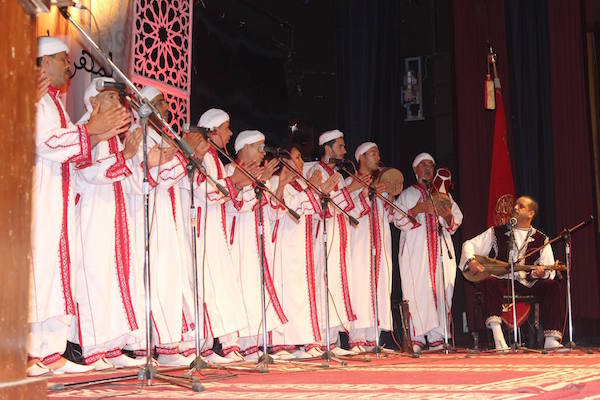 By
Faith Barker
-
Faith Barker studied Arabic and Spanish at the University of Cambridge.
Aug 23, 2015
Spread the love

London – At an evening concert during the Fes Festival of World Sacred Music, bemused European tourists and enthusiastic Moroccans sit side by side and watch the musicians enter holding candles. At a festival in Australia, the audience gazes open-mouthed as the rhythm gains pace and a woman in blue begins to trance, her long hair brushing the floor of the stage as she sways her head from side to side. In a house in Fes, teenage boys in fake designer caps and sneakers sit with their master learning the chants of the Sufi brotherhood.

The Hamadsha are one of the many popular Sufi brotherhoods in Morocco who play music in honour of their saint and the spirits. The tradition began to decline in the 1970s as a result of modernisation and the influence of Islamic reform. But recently a reconsideration of traditional music and Sufi culture globally and within Morocco has led to new performance opportunities for groups like the Hamadcha. These new performance contexts give rise to unexpected meetings and collaborations between different cultures and styles of music.

This is most true of the Hamadcha of Fes, a group led by the charismatic and energetic musician, Abderrahim Amrani. He sought new ways to adapt to changing circumstances.

‘There used to be Hamadcha everywhere, but now there is nothing left. We need to preserve Moroccan heritage,’ he says. ‘People in the past listened with their ears, but times have changed, now they listen with their feet, they just want dance music.’

Amrani’s group still play traditional ceremonies, lilas, in Fes. But beyond performing the ceremony in homes, the group has played in many of the festivals which have sprung up around Morocco over the past twenty years, and in Europe, America, and even Australia. Amrani, trying to strike a balance between renewing and protecting the tradition, is open minded. ‘Morocco is rich in heritage. In the world everyone has his own religion, his own music, but there must be interaction.’

He often works with foreign musicians, including Frédéric Calmès, a French musician who has played with the group since 2002, and myself. The group has collaborated with internationally renowned artists such as DJ Click and the International Jazz Orchestra of France.

The shows outside Morocco attract both Europeans interested in the powerful music and the trance practices associated with it, and Moroccan migrants recreating experiences of their homeland in their new countries. In one show in Belgium, Calmes says, the group played in a circus.

‘During that show women went into trance…for ten minutes it was like a real lila inside the show. If there are people with us, it immediately becomes something else.’

Just like in the lilas in Morocco, even in unfamiliar contexts it is the audience and their relationship to the performers which determines the success and energy of the performance: the hal, a word meaning ecstasy.

In addition to his collaborations with other artists, Amrani also seeks to preserve his heritage by passing it on to younger generations. In 2013 he and Calmes travelled to a festival in Taiwan with a group of boys aged twelve to eighteen from Sidi Boujida, a poor area with a high crime rate in Fes. Since then, he has continued to instruct the boys in the words and rhythms of the Hamadsha, and they have performed with him at festivals and on television in Morocco. In part, the boys are attracted by the prospect of appearing on television and travelling abroad. But learning with Abderrahim also allows them an escape from their everyday lives of difficult situations at home and school, and the lack of opportunities for the future.

‘Hamadcha helps me relax,’ Abdsamad, one of the boys in the group, says. ‘Whatever you have in your head, when you come to Abderrahim’s and do Hamadsha you get it out.’

Abderrahim’s adaptation of his tradition to rapidly changing circumstances shows the resilience and flexibility of ritual and tradition. The cultural encounters in new contexts produce hybrid performances which simultaneously preserve and renew the tradition. The Morocco of the Hamadcha today may be far removed from that of their ancestors, but the music goes on.