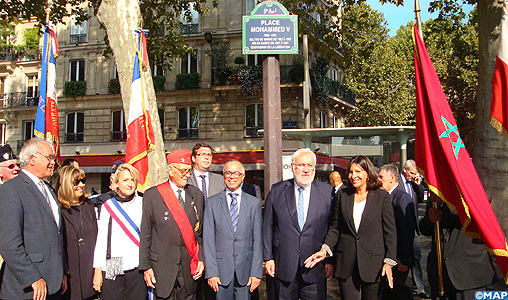 The new nameplate of the square, carrying the mention “Companion of the Liberation” near the name of late King Mohammed V and his quality as Sultan of Morocco from 1927 to 1957 and King of Morocco from 1957 to 1961, was unveiled at a ceremony held in the presence notably of the Mayor of Paris, Anne Hidalgo, French Secretary of State for Veterans and Memory, Jean-Marc Todeschini, and Morocco’s Ambassador in France, Chakib Benmoussa.

On this occasion, the wreaths were laid at the bottom of this plaque in honor to late King Mohammed V by Hidalgo, Todeschini and Benmoussa. The audience then observed a minute of silence.

The late Sovereign was made a Companion of the Liberation by General de Gaulle in June 1945 in recognition by France of the solidarity of late King Mohammed V, and through him of all Moroccans, in times of adversity.