Rabat - Morocco international Mehdi Benatia apparently did not want to appear holding a glass of beer during a Bayern Munich's collective photo shoot on Tuesday. 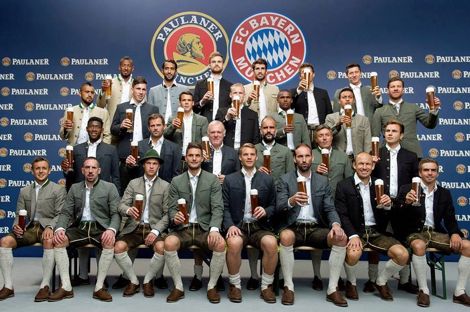 Rabat – Morocco international Mehdi Benatia apparently did not want to appear holding a glass of beer during a Bayern Munich’s collective photo shoot on Tuesday.

Benatia and teammates put on traditional German attire and posed with beer as part of the German side’s sponsorship with Paulaner brewery.

Benatia was not the only Bayern Munich player not to take hold of a glass of beer.  French mid-fielder Frank Ribery and also appear without a glass of beer in his hands. Ribery converted to Islam to marry his Wahiba from Morocco in 2002.

Benatia was forced off with a thigh injury during his team’s 2-1 victory over Hoffenheim over the weekend. Bayern won their first two games in the Bundesliga against Hamburg 5-0 and Hoffenheim 2-1.