Rabat - French investigative journalists Eric Laurent and Catherine Graciet pledged they would "not write anything about the kingdom of Morocco" if they were given € 3 million in hush money, a letter published on Saturday by the French media has revealed. 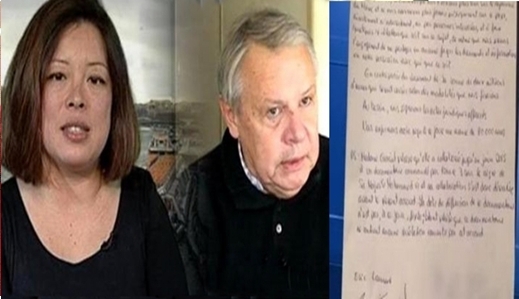 Rabat – French investigative journalists Eric Laurent and Catherine Graciet pledged they would “not write anything about the kingdom of Morocco” if they were given € 3 million in hush money, a letter published on Saturday by the French media has revealed.

The handwritten note, signed by the two journalists in August 27, 2015, has been published on Saturday by French Television BFM TV.

The letter reveals that the pair was ‘ready’ to abstain from writing anything ‘compromising’ or ‘critical’ about Morocco and its rulers if they were paid the € 3 million.

In the letter Laurent and Graciet pledged “not to write anything about the kingdom of Morocco and never speak publicly about this country directly or indirectly or through intermediaries,” “nor to make some revelations” (…) on this subject”.

They also vowed “not to share in any way the documents and information in (their) possession with anyone. The two journalists admitted to having received € 80,000 (€ 40,000 each) as down-payment on the €3 million they wanted to extort from the Moroccan monarch.

The pair has been charged with trying to blackmail King Mohammed VI out of € 3 million in exchange for not publishing a book about the monarch.

The journalists, who were released on bail on Saturday, were working on a book supposedly containing ‘damaging revelations’ about the King slated for publication early next year.