Rabat - Two new suspects linked to the attempted robbery of an armored cash-transit truck in Tangier, have been arrested. 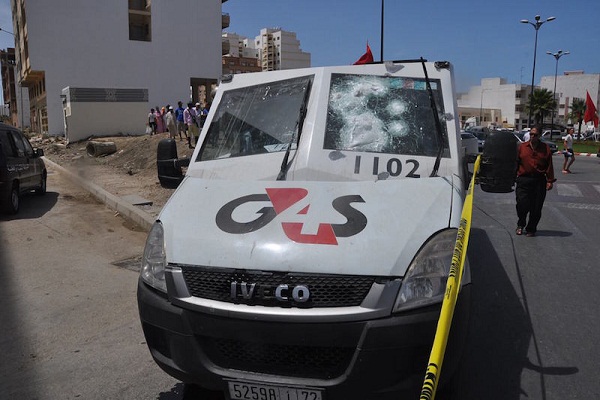 Rabat – Two new suspects linked to the attempted robbery of an armored cash-transit truck in Tangier, have been arrested.

Le360 quoted a security source informing that the newly arrested suspects were brought to justice at the Tangier Court of Appeals, along with four other suspects who had been previously arrested.

The same source added that continued investigations enabled police to arrest  other prospective members  of the criminal gang.

El Khayam added in a briefing that two of the accused are Belgian of Moroccan origin, including the ringleader, who is a repeat offender in Belgium involved in armed robberies. The other two are of Moroccan nationality.

On August 13th, the armed robbers assaulted an armored vehicle belonging to G4S Private Security Firm, on Val Fleuri Avenue in Tangier. The robbers fired around 20 bullets and lobbed a Molotov cocktail as they tried to raid the cash security van.

Abdelhak El Khayam disclosed that the leader of the gang was planning to throw a smoke grenade inside the truck, but the windows were securely locked. Thus, he pulled out a gun and fired several shots at the driver but failed to reach him due to the bulletproof glass of the vehicle.

The driver of the truck then managed to escape, while the suspect fled aboard a rental car that was also seized, said the Director of BCIJ.

It is reported that thorough investigations are being conducted with one of the suspects after discovering his criminal record in Belgium, for his involvement in arm-trafficking operations.

During his statement, El Khayam also praised the “excellent work” performed by various security services who defend the safety of citizens and the stability of the Kingdom.