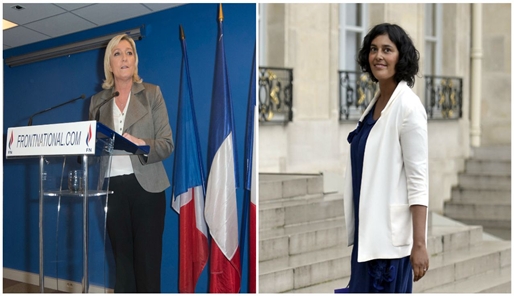 In an interview with Le Parisien, Le Pen said that Moroccan-born Myriam El Khomri, who was appointed labor minister by President François Hollande on Wednesday, was not appointed because she is competent, but because she will give the media a ‘good thing’ to write about.

“She was chosen because she is from the diversity and the socialists hope to sway the votes of this part of the population,” Le Pen said.

The decision to appoint 37-year-old El Khomri, who has served as junior minister for towns since August 2014, came after François Rebsamen left the labor ministry to become mayor of Dijon.

President François Hollande hopes El Khomri, who has a Moroccan father and a French mother, to tackle the rise in unemployment rates before presidential elections in 2017.

El Khomri will be the third labor minister since François Hollande came to office in May 2012.

Sébastien Huyghe, a member of the Union for a Popular Movement, also described the appointment of El Khomri as a “wrong signal” to French citizens who suffer from unemployment.