Rabat -Yahya El Jabali, a four-year-old Moroccan boy born without bones in part of his face joined a kindergarten in Melbourne on Wednesday. The news comes from Moroccan Children's Appeal, Facebook page created to stand in solidarity with Yahya and share his latest news.

Rabat –Yahya El Jabali, a four-year-old Moroccan boy born without bones in part of his face joined a kindergarten in Melbourne on Wednesday. The news comes from Moroccan Children’s Appeal, Facebook page created to stand in solidarity with Yahya and share his latest news.

The photo posted on the Moroccan Children’s Appeal Facebook page showed Yahya’s first day at kindergarten with his classmates and his new teacher.

The photo’s caption said that Yahya’s family were very happy and that their dream came true.

After Yahya’s story at the beginning has gone viral on social networks, Fatima Baraka, a Moroccan citizen living in Austria took Yahya to Melbourne for surgery in August.

The successful surgery of Yahya was an immense happiness and relief. Yahya’s father told , “It’s a huge joy, a huge happiness to see my son in such a situation.”

Fatima Baraka also broke into tears upon seeing Yahya’s new face, “I just can’t believe what he’s been through and how he just comes out and gets better and better every time,” She said.

Professor Tony Holmes, who led the surgeons during the operation, said  that the surgery on Yahya was as challenging as it gets.

Moroccans and Australians have showed their support for both Yahya and the Moroccan Children’s Appeal organization. The organization was founded by Fatima on social media and is used for sharing messages of love and support Moroccan and Australian toddlers in need. 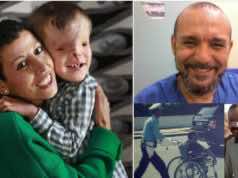 Five Moroccans Who Restore Your Faith in Humanity