Meknes - Djoir Jordan is an American Pop/Rock singer, songwriter and actress. Her song "Party pocalypse" was featured on the 20th Century Fox Film, "The Longest Ride" which was released in theaters April 10, 2015. Discovered via Lady Gaga network, "Djoir" gave an exclusive interview to Morocco World News on her life and philosophy of "Diamond Cut."

Meknes – Djoir Jordan is an American Pop/Rock singer, songwriter and actress. Her song “Party pocalypse” was featured on the 20th Century Fox Film, “The Longest Ride” which was released in theaters April 10, 2015. Discovered via Lady Gaga network, “Djoir” gave an exclusive interview to Morocco World News on her life and philosophy of “Diamond Cut.”

MWN: How did you get your start in music field?

DJOIR: My first experience on stage was when I was 3 years old, and I performed in my grandmother’s church. From there I began singing in traveling singing groups and landed a role on a syndicated kids’ TV show called “Colby’s Clubhouse.” I was one of the original cast members for 4½ years alongside Krysta Rodriguez, who later landed a TV role on the show SMASH. After Colby’s Clubhouse ended, I began singing hooks for various inspiring rappers in high school. After high school, I started auditioning for any opportunities I could find. One of the first projects to jumpstart my career was a girl group called IMPULSE. I was excited to get signed to my first production deal and quickly moved from San Diego to Hollywood, CA. I became one of four members of the group along with Janel Parrish from “Pretty Little Liars.” After making the choice to leave the project, I was asked to audition for a new group called Minx Mafia, mentored by Mr. Dalvin DeGrate from the chart-topping R&B group Jodeci. I landed the gig and became one of the lead singers for this project.

I spent about 2½ years with the girls recording amazing music and got connected to Cassandra Mills, who started Giant Records (of Warner Music), under Irving Azoff. Towards the end, like most girl groups, we found ourselves divided and wanting to go our separate ways. I am still great friends with some of the girls and remained close to Mr. Dalvin and Cassandra Mills. It’s true what they say: Never burn a bridge. I decided to pursue a solo career, checking in with both Dalvin and Cassandra, as they have continued to mentor me over the years. Now my music has been placed on film and TV, and I have made it on the dance charts for both of my singles, “Right Now” and “Control.” I am so excited to see what is in store next!

MWN: What is your philosophy of life?

DJOIR: I always try to remember: Do YOU to the best of your ability and let others do the same. You shouldn’t compete; you should be the best YOU possible. Also, always be humble and thankful for the opportunities and people in your life. Never take for granted the gifts and talents you’ve been given. Walk with a humble heart and treat others with respect and love. 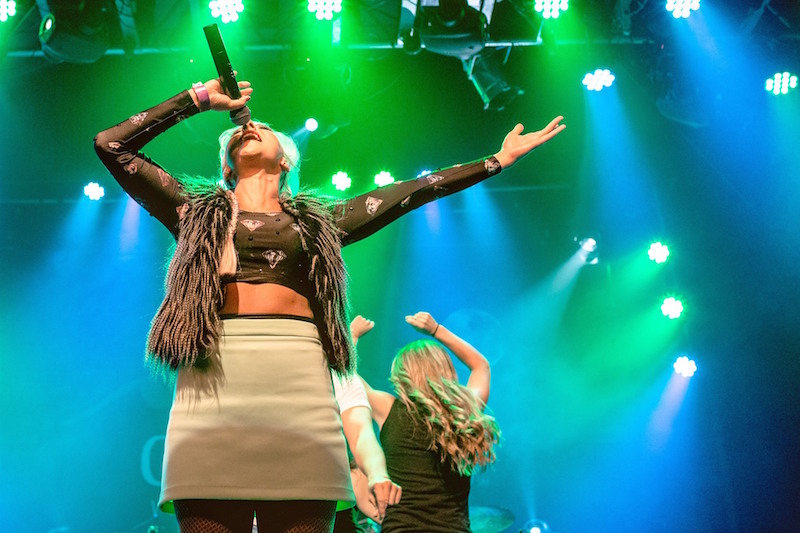 MWN: Your motto as an artist is “Be Diamond Cut.” What do you mean exactly?

DJOIR: My motto is: “Be Unique, Stand Out and Reflect Your Light to the World.”

Being “diamond cut” means you are uniquely made with a purpose! We can easily forget that because of the dark world we live in today. It’s important that we remember to be proud of who you are and not afraid to stand out. Your personality and talents are unique like a diamond and when light hits that diamond (you), it reflects beautiful colors into the world. Always remember: It’s OK to be different, it’s OK to look different, and it’s OK to think outside the box. In fact, never let limitations define who you are, who you want to be, and who you ultimately want to become. Being “diamond cut” is a movement and it’s important that we support each other, while shining our unique light into this world.

DJOIR: When Dave and I wrote this song, it was around the time everyone was talking about the apocalypse in the news (which of course never happened). It was our light-hearted way of having fun with this idea and turning it into an “End of the World Party” or similar to Prince’s song: “Party Like It’s 1999.”

MWN: You are a singer, songwriter, dancer and entertainer. How do you manage to do all this?

DJOIR (laughing): Like Nike says, you “Just Do It”! In my opinion, all of that goes hand in hand. Nowadays you have to diversify yourself as much as possible and also know how to multitask. Being a singer, songwriter, dancer and entertainer is the fun and “easy part.” It’s the networking, building solid music relationships, business meetings and scheduling that gets crazy to manage. I am fortunate to love what I do, so it doesn’t feel like work or it’s unmanageable.

MWN: You did an AFE (Armed Forces Entertainment) tour in Japan where you performed for the military troops and their families. Was it a choice or an invitation? Tell us about this experience and what did you gain from it?

DJOIR: It was kind of both. Once you go through the submission and evaluation process they have to approve and an invitation goes out. It was one of the most amazing experiences I’ve ever had! Japan was incredible and the people were so warm and welcoming. That tour was my first time traveling outside of the US, so I was like a kid in a candy store with my eyes taking in all the surroundings. It was in April so the cherry blossoms were in bloom, which made for an incredible experience.

The troops and their families were awesome, too! It’s an amazing feeling to give back to the people that sacrifice so much. They are always so grateful for a “taste of home” to come to them and totally welcomed us at every base we performed at. For me, besides building a following, I’d say I gained a sense of understanding of the military life and the sacrifices they make for our freedom. I recently got back from another AFE tour where we went to Bahrain, Turkey, Cypress, Italy, Spain and Portugal. It’s amazing to be able to do what you love and give back to the people that give their lives every day.

MWN: You publish massively on Facebook, Twitter and Instagram. What is the contribution of these social networks to your career and to what extent is it useful today to communicate to fans via this tool?

DJOIR: Having an online presence is HUGE nowadays. It opens doors that would have been shut years ago. I try to engage and talk with all my fans via Twitter, Instagram, YouTube, Snapchat, Facebook and Periscope and other social media sites as much as possible. Twitter has been amazing to me, because my fans are able to send me direct messages. Now that we are building such a strong fan base, it’s getting harder to keep up with the messages, which is not a bad problem to have. I try my best to talk to everyone I can, because I know it’s important to have a relationship with my fans. I even feature my fans, also known as my #DiamondCutFans, on #FanFriday’s and post pictures of people that come to my show, people that make signs, and people spreading the word in their towns. I love featuring my fans and those that are spreading the word, all starting a #TeamDiamondCut movement. Although online networks have been amazing to me, I also keep it “old-school,” too. I go out and meet people, shake hands and connect, whether it’s at my shows, events I attend, or on a day-to-day basis. With me doing both, I’ve seen a huge boom with my online numbers, which will result in a bigger Diamond Cut Movement.

MWN: You were first a singer in several female pop groups. Then, in 2008, you decided to go solo. Why did you make this change?

DJOIR: It was hard for me to put my heart and soul into group projects and have other people control your destiny. Any time you are in a girl group, it’s like a marriage and if you have one “bad apple” it’s like starting again from zero. As a solo artist, I can have more control over whom I let enter team Diamond Cut. I can make sure I am being true to myself and make sure I’m surrounding myself with amazing people that understand the direction, brand and work ethic I expect. One thing that I loved about being in a group was the collaboration of ideas. That’s why every member of my team has a voice and a unique aspect they bring to the project. I am always open to new ideas that make sense to who I am as an artist. This way I can continue to grow and create something new.

MWN: Which style of music do you mainly see yourself in, pop or rock?

DJOIR: I am definitely a Top 40 pop artist.

MWN: Generally, what are the themes of your songs?

DJOIR: My songs tend to be very fun, bright and upbeat. I like to have a positive message or write about real things that happen in people’s lives.

MWN: In this time of war and attacks, what message do you want the public to take away today?

DJOIR: I stand for peace and unity among all people. It’s important to understand that life is about making choices and I choose to be a light in this dark world.

DJOIR: Yes, I think that no matter what you believe in, people can connect through sound.

MWN: In 2014, you received nominations for Pop Single of the Year and Solo Performer of the Year for the 2014 LA Music Awards. What do you hope to receive in 2015?

DJOIR: Yes, and that was so amazing to be nominated for those awards. Truthfully, I never have expectations about awards. It is important for me to stay focused on creating music from my heart, performing with passion and giving back to my fans. If I get nominated or receive any awards, that’s just sprinkles on a cupcake.

MWN: You have performed in MENA countries. What do you think of Morocco and Moroccan music and is it on your visit list?

DJOIR: I would love to perform in Morocco! Definitely a place I’d like to visit and of course ride a camel! Moroccan music has such a cool beat that you can’t help but move when you hear it.