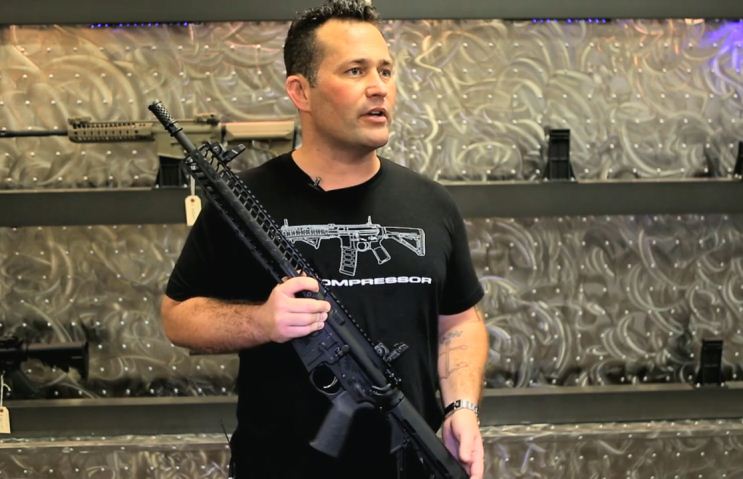 By
Karla Dieseldorff
-
Karla is an award-winning actress and producer.
Sep 7, 2015
Spread the love

The specifics of the rifle have caused controversy among anti-violence organizations and religious groups.

Spike’s Tactical in Apopka, Florida is marketing the “Crusader,” a rifle laser-etched into the magazine with a Knights Templar Long Cross on one side and a Bible verse on the other.

The Orlando Sentinel met the gun’s designer and Spike’s Tactical spokesman, former Navy SEAL (US elite forces) Ben “Mookie” Thomas, on the motives for his design and the “Crusader” specifics.

Thomas claims the rifle was “designed to never be used by Muslim terrorists to kill innocent people or advance their radical agenda”. He defends his position saying, “one of the biggest threats in the world is and remains Islamic terrorism.”

Thomas believes that the “Crusader’s” anti-Islamic design will deter a “devout Muslim to touch such weapon.” The Knights Templar Cross was used during the Christian Crusades to reclaim the Holy Land from Muslims. The Bible Psalm etched on the weapon is 144:1 which reads: “Blessed be the Lord my Rock, who trains my hands for war, my fingers for battle.”

Yet, it does not stop there. Interestingly, the weapon’s safety mechanism has 3 settings with the words, “Peace” for safe, “War” for semi-automatic, and “God wills it.”

According to Spike’s Tactical website, the “Crusader” sells for $1,395 with a lifetime warranty. It is officially for sale since last Wednesday.

Even though, Thomas says his “goal is not to offend or alienate good people;” the “Crusader” has already pushed the wrong buttons and sparked a polemic.

The Council on American-Islamic Relations of Florida (CAIR-FL) “who opposes all types of religious extremism” is against Spike’s weapon. Hasan Shibly, Executive Director of CAIR-FL reacted by asking, “Is it designed for Christian terrorists?” Hasan believes this to be a marketing strategy “it’s time for them to stop trying to make a buck on this,” he affirmed.

According to the Orlando Sentinel’s report, the US has undergone 205 mass killings so far in 2015, where only one involved a Muslim.

US Marine Nicholas Dash who served in the war in Iraq shared his view on the “Crusader.” “I spent years in the Middle East, I faced Muslim terrorists and I’ve also confronted non-Muslim forces. A weapon is an inanimate object, it is only a “thing.” It will do nothing unless you pick it up. If someone wants to kill you bad enough, they will use what they have available regardless of what is written on it.”

“People are confused, a terrorist is not synonym for Muslim. A terrorist has the mind of a criminal, and I believe if the Bible verses bother him enough, and if he even takes the time to read them, he will sand them off or cover them up,” he shared.

Dash believes the weapon’s design is just a sales tool, “a marketing gimmick” for Americans, because “when you’re in war, all bets are off. We don’t care what is written on a weapon. It is about protecting lives and being on the offensive or the defensive. Danger is all around you, it’s no time to be reading the magazine of a gun, but to shoot with it.”

Will the “Crusader” promote hatred, division and more intolerance? We do not know. Only time will tell.