Miami - Her picture is the talk of the day, her revealing outfit the main reason, and her name is Mathilde Mourinho, Jose Mourinho's daughter. 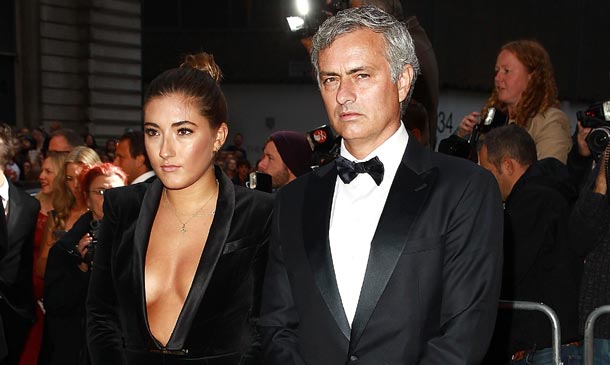 By
Karla Dieseldorff
-
Karla is an award-winning actress and producer.
Sep 9, 2015
Spread the love

Miami – Her picture is the talk of the day, her revealing outfit the main reason, and her name is Mathilde Mourinho, Jose Mourinho’s daughter.

Chelsea’s manager’s oldest daughter, simply known as Tami, accompanied her father to the GQ Men of the Year Awards, where he received the Editor’s Special Award, according to UK’s Daily Mail.

18 year-old Tami arrived at the event wearing a revealing design by French fashion brand Balmain, known as the ‘garçon style’.

The black ‘velvet tuxedo’ dress has a deep low-cut neckline designed to be worn braless. It is fitted at the waist and hips down to a miniskirt length, closing at the back with Balmain’s signature thick zipper.

Tami’s tanned skin and slender, although by the looks of her low-cut style, some may say voluptuous body, fit the gown to perfection, leaving very little to the imagination.

The dress by Balmain, favored by many celebrities is valued at £2,145 nearly EUR 3,000, according to Hola.

Wearing her brown hair in a simple up-do, small pieces of jewelry and holding a black and red clutch, Tami captured the lenses of the paparazzi and all attendees. The young women, who lives in London and studies Fine Arts, has been seen with One Direction’s Niall Horan at Stamford Bridge, among other events in London’s social scene.

According to previous photographs, Tami and her father, as well as his wife and 14-year old son have attended many events together. Yet, this is the first time the young woman dresses in such a provocative fashion.

The many pictures taken on the GQ’s red carpet, depict a sexy Tami next to a serious-faced Mourinho.

For a man winning such a special award, his attitude, as some sources say, was not too happy with the excessive attention his daughter was causing. Or maybe the ‘Special One’ is just used to being himself the center of attention; only he knows the reason of his less than joyful look.

One thing is sure, his daughter won the night’s attention.