Rabat - While newspapers across the world have paid tribute to Aylan Kurdi, the Syrian toddler who became the symbol of the refugee crisis, Charlie Hebdo has featured cartoons of the toddler, mocking his death. 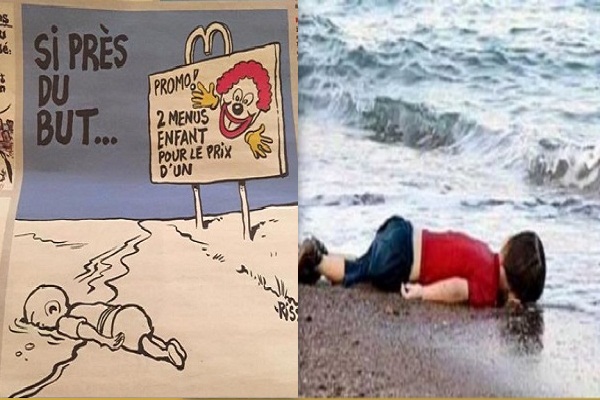 By
Aziz Allilou
-
Aziz Allilou is a student at the Higher Institute of Media and Communications (ISIC) and Morocco World News correspondent in Rabat.
Sep 13, 2015
Spread the love

Rabat – While newspapers across the world have paid tribute to Aylan Kurdi, the Syrian toddler who became the symbol of the refugee crisis, Charlie Hebdo has featured cartoons of the toddler, mocking his death.

Eight months after the terroristic attack that hit its headquarters in Paris in January, the French satirical magazine is back to the spotlight with a new controversial set of cartoons.

Hiding behind the freedom of speech, Charilie Hebdo made fun of the death of Aylan Kurdi, who was found dead recently on a Turkish beach, in two offensive drawings.

Entitled “So Close to His Goal”, the first drawing features Aylan lying face down on the sand near a publicity board of a 2-for-1 McDonald Happy Meal saying what translates into: “two children’s menus for the price of one.”

The second cartoon is entitled “The Proof that Europe is Christian.” It shows the little child drowning in the waters. On the left side, a man, supposedly Jesus, stands on the water while saying “Christians walk on waters… Muslims kids sink.”

Charlie Hebdo received harsh criticism on social media over these offensive drawings, with many twitter user labeling this move as “disrespectful.”

I condamn there acts it makes me sick but the cartoons were so disrespectful to muslims and now thy draw the Syrian Kid and make fun of him?

Ladies and gentleman, Charlie Hebdo. That’s why i was not and will never be Charlie. How can you mock that poor kid?? pic.twitter.com/q56oNrZgnY — Zariyab Mhd (@iZariyab) September 13, 2015

Charlie Hebdo is the absolute scum of the earth. pic.twitter.com/51OY32YoDv

Last week, the photograph of a the Syrian toddler whose tiny body washed up on a Turkish beach in Bodrum went viral on social media worldwide, causing outrage around the world.

The harrowing image made the headlines worldwide and has been cited as a tragic symbol of Europe’s refugee crisis.

Aylan was traveling with his 5 year-old brother Galip and his parents to the Greek island of Kos. Galip and the mother, Rehan, have also perished during their attempt to escape war in their country. The father, Abdullah, was found alive and taken to hospital near Bodrum.