Taroudant - A wave of indignation has swept across social media denouncing Charlie Hebdo for the recent cartoon mocking Syrian toddler, Aylan Kurdi, who drowned and washed up on a Turkish beach earlier this month. 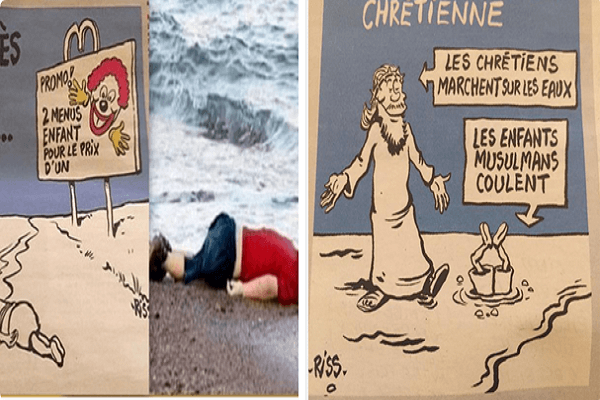 By
Larbi Arbaoui
-
Larbi is a freelance writer and assistant editor at Morocco World News.
Sep 14, 2015
Spread the love

Taroudant – A wave of indignation has swept across social media denouncing Charlie Hebdo for the recent cartoon mocking Syrian toddler, Aylan Kurdi, who drowned and washed up on a Turkish beach earlier this month.

After the world has been impacted and moved by the picture of the Syrian toddler, which has driven governments to find solutions to the Syrian refugee crisis, the controversial French magazine published a “gruesome” poster highlighting “Jesus walking on water with the dead Muslim boy next to him.”

Following this “breach of journalism ethics” by the French publication, most social media users denounced the cartoon, considering Charlie Hebdo a “bunch of deluded racists” who should not be called ‘journalists.’

Ladies and gentleman, Charlie Hebdo. That’s why i was not and will never be Charlie. How can you mock that poor kid?? pic.twitter.com/q56oNrZgnY

Other users have posted questions asking the supporters of the magazine whether they are still proud to write: #JeSuisCharlie now.

Another tweet invited people to think if defending the French magazine was worth the march in Paris that brought together world leaders.

#CharlieHebdo This is what world leaders marched in France for? pic.twitter.com/JlbKFf2jII

Some Twitter users have even called for a ‘one-million march’ against Charlie Hebdo.