Rabat - A Muslim student in north Texas at MacArthur High School was arrested after his teachers mistook a harmless homemade clock for a “hoax bomb”. The arrest has sparked renewed concerns about Islamophobia in Texas. 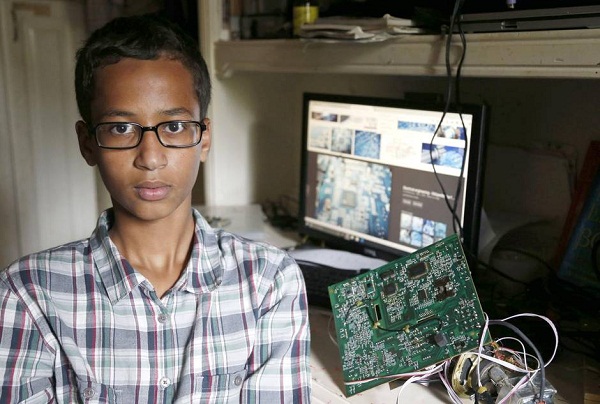 Rabat – A Muslim student in north Texas at MacArthur High School was arrested after his teachers mistook a harmless homemade clock for a “hoax bomb”. The arrest has sparked renewed concerns about Islamophobia in Texas.

On Monday, The 14-year-old Ahmed Mohamed brought an electronic clock that he built at home over the weekend to school, in an attempt to impress his teachers.

However, school officials overreacted and called police after mistakenly thinking his latest invention looked like a bomb.

“An officer and the principal came and took me to a room filled with five [police] officers,” Mohamed told local station Dallas News in a video interview from his electronics workshop at his home.

Mohamed went on to add that police handcuffed him and took him to Irving police headquarters for interrogation, fingerprints, and mug shots.

Mohamed, a self-assured kid with thick-framed glasses and a serious expression, had just started at MacArthur High School a few weeks ago.

He pointed out that his family surname repeatedly came up in police questioning. When he tried to call his father, Mohamed said he was told he couldn’t speak to his parents until after the interrogation was over.

He said police officers asked him if he intended to make a bomb, but he repeatedly insisted that he had only ever tried to make a clock.

Ahmed said, “I told them no, I was trying to make a clock.”

Police confiscated the case along with Ahmed’s tablet computer. No charges were filed, and Ahmed was released to his parents.

This incident has raised allegations of racism and made the Texas school district the target of online outrage.

“He just wants to invent good things for mankind,” said the elder Mohamed, who emigrated from Sudan. “But because his name is Mohamed and because of September 11, I think my son got mistreated.”$