Miami -  An 8.3 magnitude earthquake Hit Chile on Wednesday night at 7:45 pm local time off the coast near the center of the South American country. 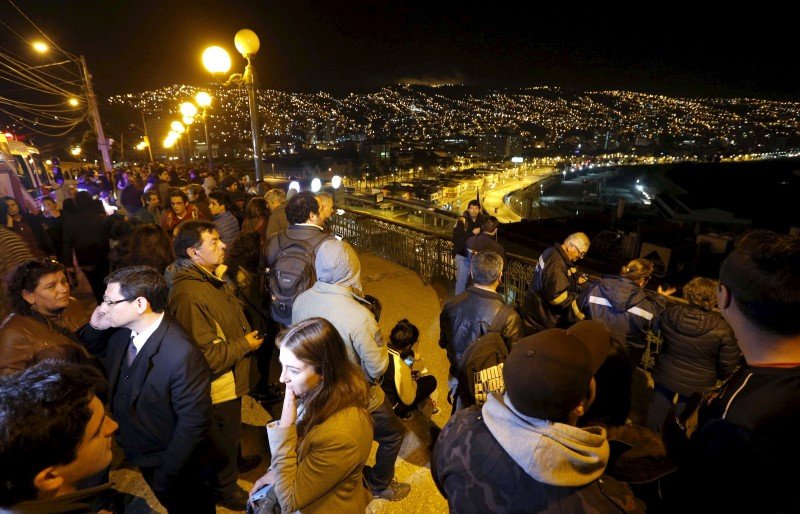 By
Karla Dieseldorff
-
Karla is an award-winning actress and producer.
Sep 17, 2015
Spread the love

Miami –  An 8.3 magnitude earthquake Hit Chile on Wednesday night at 7:45 pm local time off the coast near the center of the South American country.

CNN Chile was on the scene and several live cameras across the Chile’s affected cities have shown feed from the moment the earth shook. The epicenter of the quake was 46 km west of Illapel, a town located three hours north of Santiago de Chile, according to the US Geological Survey (USGS).

Following the massive earthquake, tsunami warning sirens were sounded all over the alert zones. Evacuations have been taking place ever since. Buildings swayed and several videos have surfaced where people are screaming as items are falling inside grocery stores, leaving aisle floors covered in damage.

The USGS have issued a tsunami threat forecast that is being constantly updated. Tsunami waves could be hitting areas like Hawaii, Australia, New Zealand and the French Polynesian islands.

The Guardian’s local correspondent Jonathan Franklin who experienced the earthquake near the coast said: “It was a very long quake, it must have been about two minutes long…People are terrified…Already we’re hearing reports of buildings collapsing and also of rock slides, there’s a lot of really arid, mountainous zones here, and electricity out”.

According to Franklin, residents in coastal areas have 5 minutes to head up “30 or 40 m above sea level” after the tsunami sirens go off since that is the timeframe when waves are expected to hit.

Social media users and local news outlets in Chile have been posting images of the evacuations in several cities, highlighting Valparaiso. Pictures of the damages in infrastructure have also come up.

Coastal cities have reported flooding and images of waves hitting the shore.

Since the earthquake struck at rush hour, most people were still out in public places, malls, universities, restaurants, etc. Several buildings have been evacuated and thousands of people have run into the streets, according to the Guardian.

The National Oceanic and Atmospheric Administration (NOAA) have registered waves up to 4.5 m high hitting the shore of Coquimbo, a town north of the epicenter.

The tremor was also felt in Argentina where sources report evacuations in Buenos Aires.

Tsunami warnings are expected to be in effect until further notice. Aftershocks have continued to strike the already affected areas and damages are not fully reportable yet.

The President of Chile, Michelle Bachelet, addressed the nation as of 12:03 am local time (Thursday) confirming the current toll death at 3 people.

As of 12:45 am local Chile time the casualties have risen. The Ministry of the Interior and Public Security said 5 people are confirmed dead and one million people have been evacuated from the affected zones.