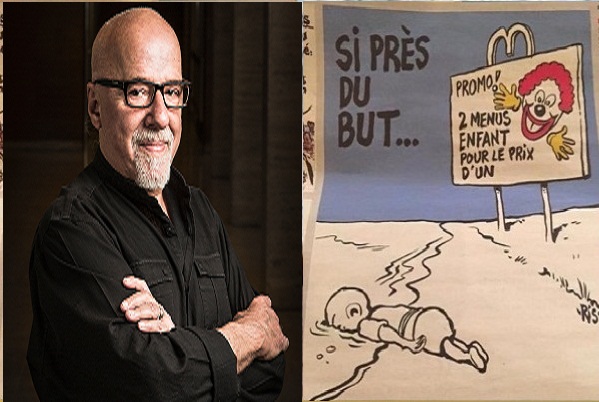 The Brazilian author posted on September 15 an image of Charlie Hebdo’s cover, which features a gruesome picture of the drowned three-year-old lying face down on the beach, on his Facebook page with a statement saying, “What a STUPID way to try to be funny #shame”.

“Total lack of respect for the sake of a (bad) joke,” Paulo Coelho added.

The post received major attention on the social network, gaining over 29,444 likes and more than 8,996 shares.

Some users replied to the post saying that Charlie Hebdowas criticizing Europe’s response to migrant crisis with the cartoons of Aylan Kurdi, rather than mocking the Syrian toddler’s death.

Meanwhile, Coelho replied to these comments saying, “Many of you are saying that CH is trying to open our eyes, as if we were a bunch of stupid people who don’t know what is going on. A nice way to put it, but I still think that Charlie Hebdo deserves the Petra Lazlo Prize for Brutal Coverage of the Migrant Crisis.”

While many users liked Coelho’s point of view, as the reply received more than 1,147 likes, a Facebook user, under the name of Tamara Hall, denounced Coelho’s response, alleging that he is wrong.

“Paulo Coelho, you are WRONG. Apparently we are indeed a bunch of stupid people who can’t differentiate between a perfectly valid rhetorical device and a joke. You, out of all the people commenting, should know better. Such a disappointment if it’s really you behind the keyboard,” she wrote.

The Brazilian author did not ignore Tamara’s comment, and replied to her, saying, “Tamara Hall, everything starts with rhetoric -from bullying to haters, to fundamentalism, to the most beautiful poems, to the justifications to invade Iraq. Rhetoric gave us Socrates and Hitler, and they are very different.”

Earlier this week, Charlie Hebdo came under fire for publishing cartoons on the death of three-year-old Syrian AylanKurdi – cartoons that many people have deemed disrespectful.

It was reported that the satirical French newspaper could face a legal action. British lawyer and political activist Peter Herbert, Chair of the Society of Black Lawyers and former Vice-Chair of the Metropolitan Police Authority, said the Society of Black Lawyers “will consider reporting this as incitement to hate crime & persecution before the International Criminal Court.”