Rabat - The Syrian refugee, running in despair with his child in arms, who was tripped over by a Hungarian journalist last week, is now on his way to become a football coach in Spain. 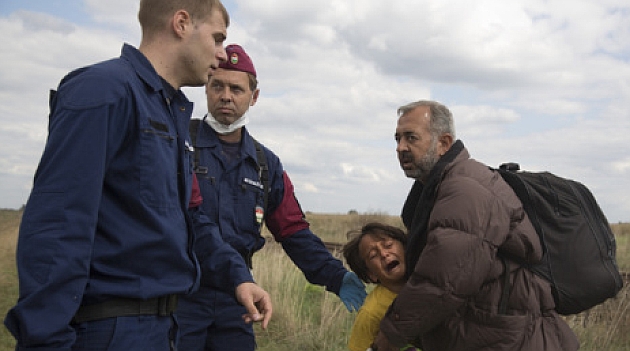 By
Aziz Allilou
-
Aziz Allilou is a student at the Higher Institute of Media and Communications (ISIC) and Morocco World News correspondent in Rabat.
Sep 17, 2015
Spread the love

Rabat – The Syrian refugee, running in despair with his child in arms, who was tripped over by a Hungarian journalist last week, is now on his way to become a football coach in Spain.

Refugee Osama Abdul Mohsen and his son Ziad made headlines worldwide over the past week, after video footage of them being knocked to the ground near the Hungarian-Serbian border by a Hungarian journalist, went viral on social media.

He ended up in Munich, Germany where media reported that he had been a coach for al-Fotuwa, a first-division football team in Syria, before the civil war forced his family to flee their hometown of Deir Ezzor

Osama attracted the attention of the President of Spain’s National Soccer Coach Training Center, Miguel Ángel Galán who arranged to bring him to Spain and help him rebuild his life.

The soccer training school used part of its annual budget to rent an apartment for him and his family in the Madrid suburb of Getafe. The school also plans to help Mohsen apply for asylum in Spain.

A report by Spanish outlet Marca said Mohamed Labrouzi, one of the school’s coaching graduates who was born in Morocco, traveled to Munich in order to meet with the Syrian family and act as an interpreter to explain the proposal.

“Thank you to everyone in Spain who has shown solidarity with Osama and his son Zaid,” the school Tweeted, adding that Osama Abdul Mohsen and his 7-year-old son Zaid will be arriving later this evening.

On Wednesday, around midnight, Osama Abdul Mohsen who was thrilled with the idea arrived in Getafe, a small city on the outskirts of Madrid.

Osama, who speaks Arabic and a bit of English, will be required to learn Spanish for the job, said Luis Miguel Pedraza, a former national soccer referee who now oversees training of other soccer coaches.

“The first thing is to get him settled,” Pedraza told Al-Jazeera. “We’re giving him a hand as a humanitarian gesture. Later we’ll look for something. He’s interested in our school.”

In a video interview posted on El Mundo’s website, Mr. Mohsen expressed his gratitude and said, in English, “I see a future for my family in Spain.”