Rabat - American police officers are making headlines again due to their use of excessive force in the arrest of civilians, this time an African American student minor in Stockton, California. 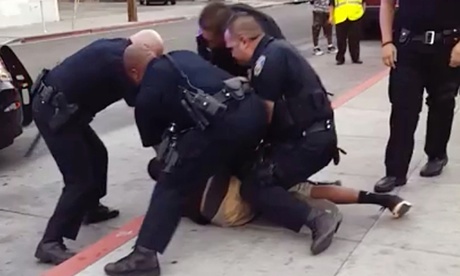 Rabat – American police officers are making headlines again due to their use of excessive force in the arrest of civilians, this time an African American student minor in Stockton, California.

A video posted on YouTube by student Edgar Avendaño, who witnessed the events, shows a police officer holding down an African American teenager with a baton, on a bed of flowers. The teenager keeps covering his face and telling the cop “don’t touch me” while the officer insists in submitting him and shouting at him “turn around” and “stop resisting.”

Witnesses recounted the events prior to the video. On September 16, the young man was “jaywalking” in bus lanes (walking or crossing the street other than at a crosswalk) when the cop asked him to sit down. The teen kept walking to the bus, which angered the officer who tried grabbing him by the arm to stop him. Yet, he did not pay attention to his orders and was seen to continue walking so the cop took out his baton as a form of submission.

That is the point where the footage starts rolling. Throughout the entire video, a woman is heard in the background loudly screaming, “It’s f***ing kid! Get off him!” No one else observing the scene does anything and the woman keeps shouting “All that for jaywalking? Leave him alone, he didn’t do anything wrong!”

The officer is then seen calling for reinforcement and police sirens are heard approaching. Rapidly, four police officers surround the scene and tackle the kid to the ground the same way they do to a dangerous criminal.

As if that were not enough, four other officers show up and stand to cordon off the scene where the other five who were already wrestling the victim handcuff him and walk him to the police car for detention.

It takes a total of 9 police officers to handcuff and arrest 1 unarmed African American minor.

Stockton Police spokesperson Joseph Silva has declared that the 16-year old boy defied orders and responded with obscene language, prior to the cop hitting him with the baton. According to Silva, the boy grabbed the baton so the officer responded with force due to “weapon retention”.

Stockton municipal law considers it a violation to walk in ‘bus only’ lanes.

US police officers all over the country have been accused of using excessive force in the treatment of victims as well as being considered “racists” in their arrests. Several reports of this kind have flooded the news causing an outrage that has turned into a police-civilian war in which law enforcement has been shot and killed.