Rabat - French President Francois Hollande is due to arrive this Saturday afternoon in Tangier, northern Morocco, accompanied with a large delegation, in a two-day visit to Morocco. 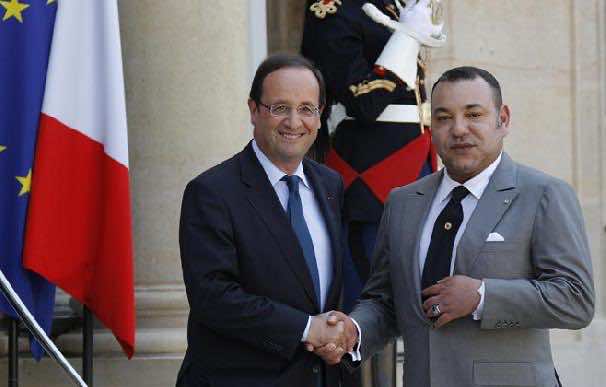 Rabat – French President Francois Hollande is due to arrive this Saturday afternoon in Tangier, northern Morocco, accompanied with a large delegation, in a two-day visit to Morocco.

A report by RFI said Hollande will be accompanied by five ministers and a delegation of business leaders, as well as Paris-based Moroccan writer Tahar Ben Jelloun and French-Moroccan actor Jamel Debbouze.

RFI pointed out that Hollande intends to strengthen economic ties between the two countries.

The French president is due to meet with King Mohammed VI and Moroccan Prime Minister Abdelilah Benkirane in Tangier, in order to exchange views on means to move forward bilateral cooperation in various fields, particularly the fight against radicalization and economic development.

On Tuesday, the French foreign department said that Hollande’s visit to Morocco will help deepen cooperation between the two countries in all fields.

“The travel of the president of the republic to Tangiers will help deepen our cooperation in all fields”, said spokesman of the Quai d’Orsay, Romain Nadal, in a press briefing.

“We have an exceptional partnership with Morocco”, he said.

A diplomat told French news agency AFP that Hollande and King Mohammed VI are expected to hold talks on preventing radicalism and are to sign an agreement on the training of imams.

Climate change will also be on the agenda, ahead of the COP21 United Nations Conference on Climate Change to be held in Paris from the end of November.

Morocco, which will host the COP22 event at the end of 2016, is the first Maghreb country to have submitted its contribution to lowering emissions, with the goal of moving to 42 per cent use of renewable energy by 2020.

During the visit, President Hollande will also decorate Morocco’s Head of the Domestic Intelligence Agency (DST) and National Directorate for National Security (DGNS), Abdellatif Hammouchi, with the Insignia of Chevalier of the Legion of Honor.

Observers in Morocco said decorating Hammouchi appears to be an attempt by the French authorities to recognize the mistakes the country has amde towards the Moroccan official.

“It [France] will show again its respect for him [Hammouchi] by awarding him this time Les Insignesd’ Officier de la Legion d’honneur,” French Interior Minister Bernard Cazeneuve told the press in the capital Rabat in February 2015.

This is François Hollande’s second visit to Morocco. In April 2013, Hollande met with King Mohammed VI and Head of Government Abdelilah Benkirane in Rabat. The French President also addressed the Moroccan Parliament.