Taroudant - CCTV footage posted on YouTube shows a Saudi man walking down an empty street in Saudi Arabia when he luckily escapes what could have been a fatal death as a window pane free falls from a tall building smashing on the pavement very close to him. 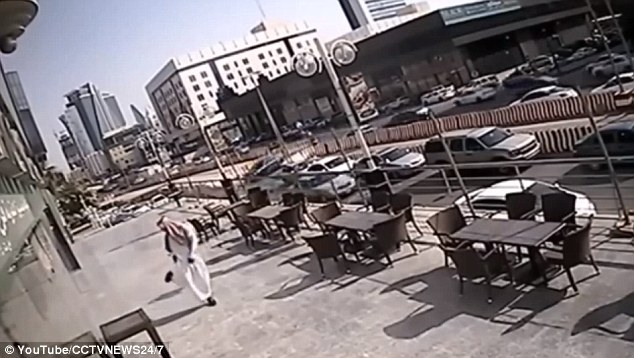 By
Larbi Arbaoui
-
Larbi is a freelance writer and assistant editor at Morocco World News.
Sep 22, 2015
Spread the love

Taroudant – CCTV footage posted on YouTube shows a Saudi man walking down an empty street in Saudi Arabia when he luckily escapes what could have been a fatal death as a window pane free falls from a tall building smashing on the pavement very close to him.

The man, who was wearing a Saudi traditional robe and a kufiya around his head, was peacefully walking on the curb in front of what appears to be a food establishment, merely seconds before a huge glass window falls lengthwise within inches from him, knocking the man to the ground.

Fortunately the large pane misses and does not hit him in the head, even though his kufiya goes flying in the air from the impact.

Shockingly, the Saudi man stands up with no apparent injuries, but he seems completely unaware of what is going on around him or he could be in shock.

The massive glass is seen crashing on the pavement shattering into pieces that seem more like dust than broken glass.

The scene could have resulted in a tragic accident if the street had been full of pedestrians, but to the best of luck, the only man on the street was also safe.