Rabat - Osama Abdul Mohsen, the Syrian refugee who rose to the limelight after he was filmed being tripped by a Hungarian camerawoman as he tried to cross the Hungarian border, was allegedly a member of a militant Islamist group fighting against the Kurds in Syria. 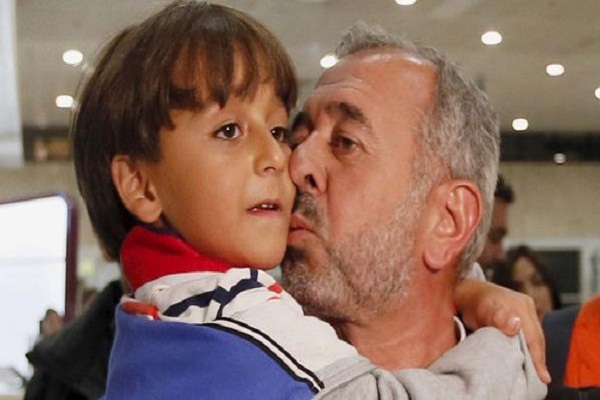 Rabat – Osama Abdul Mohsen, the Syrian refugee who rose to the limelight after he was filmed being tripped by a Hungarian camerawoman as he tried to cross the Hungarian border, was allegedly a member of a militant Islamist group fighting against the Kurds in Syria.

In a statement published last week and carried out by Russia Today (RT) on Monday, the Syrian Kurdish Democratic Union Party (PYD) accused Abdul Mohsen of “being a member of the Al-Qaeda-linked militant group Al-Nusra Front.”

“Osama Abdul joined the rebel groups in 2011 and committed crimes against civilian minorities, including Kurds,” claims the statement published Friday.

The PYD added that it obtained images from Facebook backing their claims that Osama Abdul Mohsen was fighting alongside Al-Nusra Front against the Kurds.

They published what they describe a picture of Abdul Mohsen from his Facebook page where he allegedly identifies himself as a member of the Nusra Front. The Facebook page was closed down earlier this year.

The Kurdish party also claimed that Abdul Mohsen left Syria to Turkey ahead of Kurdish forces seizing the city of Tel Abyad ‘in fear’ that his involvement with the Al-Nusra would be exposed.

The PYD also accused Mohsen of inciting violence during a football match between Syrian clubs al-Fatwa and Qamishlo’s Jihad club in 2004.

The statement claims that the former football coach of al-Fatwa club (from 2004-2010) was the “mastermind” behind the clashes that resulted in the deaths of more than 50 Kurds.

Mohsen got international support when a video of him being tripped by a Hungarian camerawoman, who has since been fired, with his 8-year-old son in his hands went viral and prompted uproar around the world.

Mohsen was invited to live in Spain and also offered a job as a football coach in the Spanish football school Cenafe in Getafe, near the capital Madrid.

His family was also invited by Real Madrid’s ace Cristiano Ronaldo to attend the club’s game against Granada over the weekend.