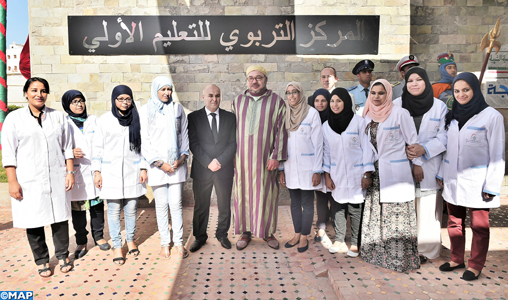 This project shows the sovereign’s special interest in issues related to protecting children, securing their future and preserving their dignity.

This plan, which is in line with the goals of the “Tangiers-Metropolis” program, will provide quality preschool education for kids from underprivileged families in the targeted neighborhoods, eradicate illiteracy and generalize preschool education, which is a prerequisite to ensure equal opportunity in education.

The plan is a fruit of a partnership between the INDH, the ministry of education and vocational training, the Tangiers-Assilah prefecture, the Tangiers urban commune and the Moroccan foundation for the promotion of preschool education.

Out of the 23 scheduled centers, 12 have already been constructed, nine are under construction and two will be launched next October.

These facilities, which offer supervision and education, are in conformity with international standards and include classrooms, leisure areas, infirmaries and playgrounds.

These different projects will contribute to fostering the educational offer in the city of Tangiers and will enable the population to be part of the city’s multidimensional development dynamic.