Rabat - The Moroccan and the Dutch national football teams are constantly trying to secure top talent for their rosters. 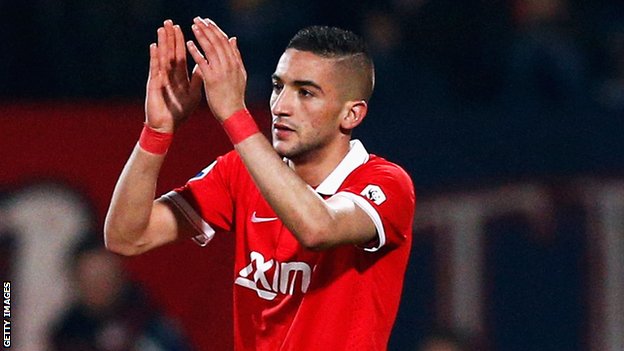 Rabat – The Moroccan and the Dutch national football teams are constantly trying to secure top talent for their rosters.

The Dutch team fears that they could be losing their North African players to Morocco. Among those are Hakim Ziyech, Anwar El Ghazi and Oussama Tannane.

The situation has gotten worse since Hakim Ziyech, who plays for the Dutch team, announced that he had chosen to play for Morocco in two “international friendly” matches next October, according to the BBC.

The 22-year-old midfielder, who has dual citizenship, will represent Morocco’s Atlas Lions against the Ivory Coast and Guinea next month.

However, the Twente Enschede Dutch team, for whom Ziyech plays, does not want to let him go and hopes to convince the emerging star to play for the Netherlands.

Another player, El Ghazi, 20, who plays for the Netherlands’ Ajax Amsterdam, gained recognition recently after scoring seven league goals for his team.

Following the skillful moves of these three North African-born stars, Dutch media has been talking about them extensively, especially after a Dutch newspaper published the headline: “Possible successors to [Wesley] Sneijder, [Robin] van Persie and [Arjen] Robben.”

Since these three players have not yet won a senior cap in an official international match, they are still able to change their allegiance as they wish, prompting the Netherlands to carefully watch their next moves.

There is no doubt that players’ nationalities can play a big part in their choices, and the Netherlands will have to wait and see who they can keep and who leaves to return to their roots.