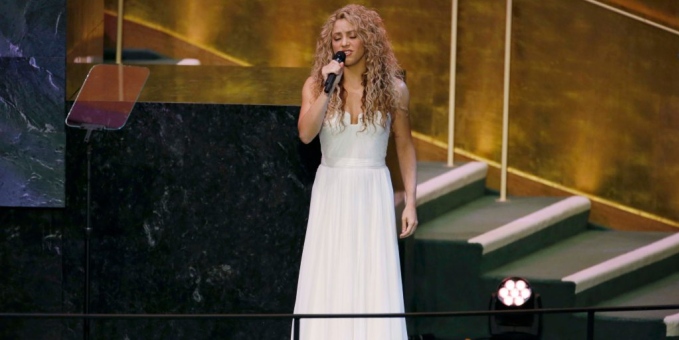 By
Karla Dieseldorff
-
Karla is an award-winning actress and producer.
Sep 26, 2015
Spread the love

The international superstar, who is a Goodwill Ambassador for UNICEF and an advocate for children’s rights, was invited to sing at the Opening Ceremony of the Post-2015 Development Agenda Summit, held at UN’s Headquarters in New York City..

Shakira, 38, dressed in a simple long white dress, addressed the representatives of member states in attendance of 70th session of the UN General Assembly with some thought-provoking words.

“We live in a world in which many of those who were born poor, will die poor, and it is up to us to be the first society to eradicate poverty and bring justice and equality to the most disenfranchised people on Earth. Our children have the right to equal opportunities, to thrive, to be happy and healthy and safe. Now is the time to not just imagine, but do.”

“This is for Aylan Kurdi and Galip Kurdi,” said Shakira, dedicating her performance to the two Syrian refugee children who drowned at sea while fleeing Syria with their family. The Kurdis have become the symbol of suffering in the Syrian refugee crisis.

Accompanied by a live band, she sang ‘Imagine’, a poem-inspired song composed by John Lennon, whose compassionate lyrics are meant to raise awareness of the world’s problems.

One of the song’s most famous lines read: “Imagine all the people living in life in peace.” The Colombian performer was accompanied by video footage and images of children from all around the world in the background.

Born Shakira Isabel Mebarak Ripoll on February 2, 1977 in Baranquilla, Colombia, the singer, producer, songwriter, dancer, activist, model, and entrepreneur has a romantic relationship with Spanish football star Gerard Piqué, with whom she has two children.