Miami - A new video has surfaced the web comparing the similarities between football players Anthony Martial and Thierry Henry. 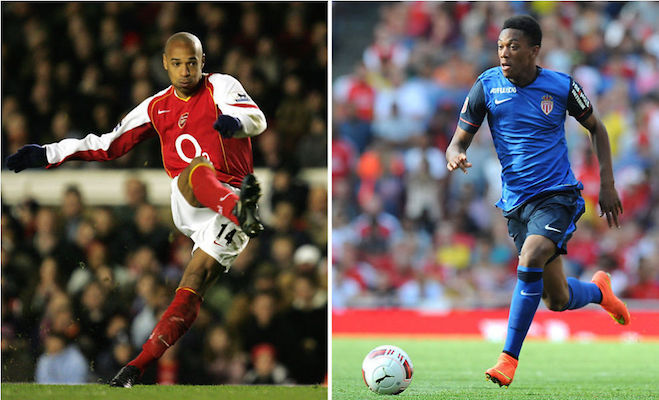 By
Karla Dieseldorff
-
Karla is an award-winning actress and producer.
Sep 27, 2015
Spread the love

Miami – A new video has surfaced the web comparing the similarities between football players Anthony Martial and Thierry Henry.

According to Chilean football website Red Gol, the resemblances between the French stars are “impactful”, nearly to the point of considering Martial a “reincarnation” of Henry.

As observers are showing their enthusiasm over Martial’s outstanding performance at the Premier League, several media outlets are talking about the new Manchester United’s star.

Anthony Martial is creating such hype with his skill and personality that some are already comparing him with football legend Thierry Henry.

Red Gol’s report and video footage depicted their likeness in detail. Both players were born in France and raised in Les Ulis, south of Paris.

They were both 17 years old at time of their professional football debut. Also, Martial and Henry, both played for Monaco leaving a successful mark during their time at the club.

As far as their physical appearance, the French-born international players hold a great resemblance, even in their mannerisms, as showed in a dual image of both of them.

According to the same source, when Thierry Henry played for the Arsenal, he scored an unforgettable goal against Tottenham. In the same way, Anthony Martial, now playing at Manchester United, scored an almost “identical” goal against Liverpool.

The video shows the goals next to each other and compares them in slow-motion to prove that their moves, feints, dribble, and definition are in fact “impressive” and “identical.”

Furthermore, one of those who noted the similarities between the French stars was Brazilian football midfielder Thiago Silva who also mentioned Martial’s controversial transfer amount in a statement.

“I don’t know if he’s worth 80 million, but he does remind me of Henry in his technique, appearance and his understanding of the game,” said Silva.

It remains to be seen if Anthony Martial will break that record at Manchester United and set a new goalscoring record for France. The 19-year-old, however, is doing an exceptional job so far.